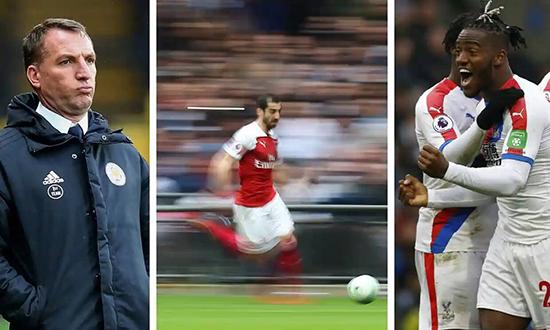 1) Bournemouth’s negativity only earns them a slow death

How do you deal with Manchester City? Take them on? Or get 11 players behind the ball and hang on for grim life. It was certainly a curious game at Bournemouth on Saturday – if you can call it a game. Eddie Howe’s side lost narrowly, 1-0, but it is hard to think of a more misleading scoreline. Bournemouth became the first club since Opta has been gathering data to fail to register a shot on or off target in a Premier League match. The home team never even won a corner. Kyle Walker, Manchester City’s right‑back, completed more passes than the entire Bournemouth team, who had 18% of possession. Howe admitted afterwards that he feared the consequences if Bournemouth opened up against City and he probably had a point. The alternative, however, is a slow death by 810 passes and that is a fairly joyless experience too. Stuart James

It has not been easy for Alireza Jahanbakhsh to adapt to the Premier League during his first year in England, but the Iran international showed he can be a threat in Brighton’s vital win against Huddersfield. Jahanbakhsh was Brighton’s most enterprising player after being handed his fourth league start of the season, and he was unfortunate to be taken off moments before Florin Andone’s late winner. The 25‑year‑old winger, who has struggled since his £17m move from AZ Alkmaar, could have scored twice and will feel he played well enough to keep José Izquierdo on the bench when Chris Hughton’s side visit Crystal Palace this weekend. “I am hoping we are going to see more,” Hughton said. “He is a goalscorer and that is why we brought him in. You like to think that with Alireza in the team we can get more goals.” Jacob Steinberg

Crystal Palace are the latest beneficiaries of Chelsea’s buy‑to‑let schemes. In putting his latest loan team 2-0 up at Burnley, Michy Batshuayi scored his second goal in three matches having been redirected from Valencia. Palace struggled for goals for the first half of the season while Roy Hodgson could not call upon a serviceable striker. Batshuayi has added cutting edge and thrust to help Palace pull away from the bottom three. His arrival has coincided with the revival of – and greater freedom for – Wilfried Zaha, who scored a superb goal at Turf Moor having previously contributed to Phil Bardsley putting through his own net. Maurizio Sarri is the second successive Chelsea manager to turn his nose up at Batshuayi after Antonio Conte, but with Álvaro Morata borrowed by Atlético Madrid and Gonzalo Higuaín lacking sharpness, the Belgian, despite his unpredictability, might have been a useful wild card. John Brewin

4) Lack of away goals the biggest worry for Jürgen Klopp

It is impossible to consider Liverpool’s recent form without using the B-word. Yes, a run of four draws in six league games is undeniably a blip. And, while there are worrying signs, it would be premature to use the other B-word. Teams have overcome far worse dips in form during the run-in to win the title, and nobody really knows whether Liverpool are bottling it or not. Their problem is easy to recognise and harder to resolve. They have stopped scoring away from home, with only three goals in the last five league games away from Anfield. The defence is still watertight, with Virgil van Dijk strolling through a nervous title race with a resting heart rate, and that is vital because it means one goal will be enough to win most games. With Roberto Firmino subdued for most of the season and Mo Salah not at his best, it might be time for Jürgen Klopp to think about temporarily breaking up the front three. Whatever he does tactically, one thing’s for sure: in the next two months, his considerable man-management skills are going to be tested like never before. Rob Smyth

Fulham’s stint in the top flight will be short-lived. The club have accepted as much, with Scott Parker acknowledging there will be a period of restructuring in the summer. “Clubs change when they are relegated,” he said. “You go from the best league in the world, with all its billions of pounds, to the Championship.” Yet what is clear, even from a solitary glimpse of a Parker team, is Fulham will go down playing a brand of football more in keeping with the reputation forged while rising from the second tier. They were slick and adventurous for periods here, with some of those who had secured promotion revived by the caretaker manager’s presence. “I wouldn’t want to do it any other way,” Parker said when asked about reclaiming this team’s identity. “If someone from above told me to do something else, I’d have to say to them: ‘I’m not your guy,’ and wouldn’t carry on.” This whole campaign has been an anticlimax. Yet Fulham can still go out in style. Dominic Fifield

Reports of David de Gea’s decline have almost certainly been exaggerated, even if the goalkeeper was beaten twice by shots from outside the area at Old Trafford. That sounds damning, though you have to see the quality of the shots before coming to any conclusion. Even though De Gea got his hands to the first one from Yan Valery it was so powerfully struck he was still unable to keep it out of the net. The second, a free kick by James Ward-Prowse, was so perfectly executed the goalkeeper could not get near it. Even Ole Gunnar Solskjær was impressed by the visitors’ goals. “Their two goals, wow!” United’s caretaker manager said. “Two strikes of real quality.” Naturally Ralph Hasenhüttl agreed. “Valery is like Prowsey, they are both in fantastic shape in defence and attack. We scored two marvellous goals,” he said. Paul Wilson

7) Henrikh Mkhitaryan makes up for lost time with fine display

There has been so much focus on a certain mercurial attacking player at Arsenal that most people have forgotten about the other one. It has been just over a year since Henrikh Mkhitaryan joined the club from Manchester United and it is safe to say his career in north London has yet to catch fire. Injuries have played their part but there has also been a string of indifferent displays from someone who not long ago was viewed as being among the finest talents in Europe. Mkhitaryan was in danger of losing his way, but then came his display against Tottenham. The Armenian was excellent, providing drive in attack as well as cover in defence. Unai Emery praised the player afterwards while also pointing out that “usually he can’t [consistently work] for 90 minutes”. But there was certainly more than enough on show to suggest Mkhitaryan, unlike Mesut Özil, has the all-round requirements to fit into the Spaniard’s plans. Sachin Nakrani

As confected rivalries go, the one that has sprung up between Leicester and the serial Scottish champions takes some beating. “We all hate Celtic” was one of the chants that emanated from the away end at Vicarage Road, presumably in response to the “mediocrity” charge levelled by sections of the Glasgow club’s support. One suspects Brendan Rodgers would prefer both sides to turn it down and he was suitably conciliatory after his new side’s 2-1 defeat. “It was sad, obviously, to leave Celtic and the quickness of everything … I didn’t have the chance to say goodbye to lots of people that meant a lot to me. I knew Celtic supporters were hurting and I’m never going to be critical of them, I understand how they feel. But they had a good result yesterday [2-0 at Hibernian] and we’ll both move on.” The dust will surely settle in good time although a pre-season friendly is presumably off the agenda for the foreseeable future. Nick Ames

Newcastle would be particularly ill-served by a drop-off in form now given the reluctance of Rafael Benítez to consider his future until they are safe. Their insipid defeat at West Ham felt like a rude awakening after a major uptick over the previous month; it was a reminder, too, that their record signing Miguel Almirón will not be able to solve everything. Almirón was painfully quiet, and comfortably outshone by West Ham’s Felipe Anderson and Manuel Lanzini. He will have days like this because, when all is said and done, the leap from Atlanta United and the Major League Soccer to England’s top flight is gigantic. “Of course, people need to be patient,” his teammate Isaac Hayden said. “You can see his talent and what he brings, but to do it on a consistent basis in the Premier League is a completely different thing. Realistically this is his pre-season still.” It was difficult to argue and Benítez may need more seasoned heads to see Newcastle over the line. Nick Ames

10) Raúl Jiménez has earned the right to a permanent deal

Quite how influential and impressive Raúl Jiménez has been in his debut season in the Premier League seems to have gone a little unnoticed outside Wolverhampton. That might be good news for Nuno Espírito Santo as Wolves can trigger a €38m (£30m) option to sign the forward permanently from Benfica this summer, providing all parties agree to the switch. That fee for the Mexican, who has scored 11 goals and set up six more in the league, increasingly looks a snip. Jiménez, who possesses poise as well as power, again led the line imperiously alongside Diogo Jota as Wolves comfortably dispatched Cardiff to maintain their hopes of European football. Outside the top six, Jiménez is the division’s leading scorer. He can seemingly do it all; play the role of a battering ram, link play, pick out others and, most importantly, score. Ben Fisher