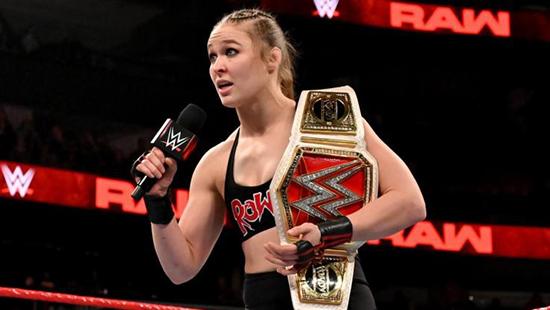 The story between Ronda Rousey, Becky Lynch and Charlotte Flair continued on the March 4 episode of Monday Night RAW as the show ended with “The Baddest Woman on the Planet” seemingly turning heel.

In the closing segment of RAW, Ronda stormed into the ring and interrupted a contract signing between Charlotte and Becky. Rousey told Stephanie McMahon to give her belt back after she relinquished it  last week when her demands to add Becky Lynch to her WrestleMania match with Charlotte Flair were denied.

Stephanie gave the title back but keeps the already announced Charlotte vs Becky match at Fastlane. Now instead of it being a title match, if Becky wins she gets inserted in the WrestleMania match between Ronda and Charlotte.

After the announcement Ronda cuts an impassioned promo saying Stephanie values her wallet and money over her pride. Ronda says Stephanie would never fire her because she makes the WWE too much money and says she can go rogue at any moment and has free reign to do anything she wants in the ring.

Ronda then turns her ire to the WWE Universe saying that she did everything to be good in “this business” and “exceeded expectations.” And what she got for it was getting booed in her home of Los Angeles, and the fans cheering Becky over her while she’s working hard to become better and entertain them.

“But no I’m done pretending. I’m no longer here to entertain you,” Rousey said. “I’m not your dancing monkey, not anymore. Damn your fantasies, damn the man, screw the woo and no more Mrs. Nice  B****.”

Earlier in the night, Stephanie announced that criminal charges Becky Lynch incurred last week for disrupting RAW would be dropped, as well as her suspension. At the time, the match for Fastlane was for the RAW Women’s Championship but those plans quickly changed.

With a few weeks until WrestleMania 35 in New York City, this new attitude from Ronda will likely be on display again and again as we head into April.

The Fastlane pay-per-view will stream live on the WWE Network March 8.

What did you think of the closing segment of Monday Night RAW? Do you believe Becky Lynch will win at Fastlane? Let us know in the comments section below.