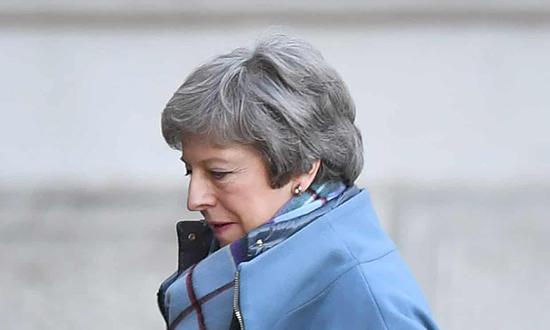 Members of the European Research Group have warned the prime minister not to ambush them with a last-ditch legal deal on the Irish backstop and expect them to vote in favour of it next week.

Leaders of the hardline Tory Brexiteer group said they would only consider voting for any agreement struck between Attorney General Geoffrey Cox and Brussels if they had the the chance to examine it in “good time” to “form a judgment in advance of a vote”.

The warning means “practically” that Theresa May must reach an agreement with Brussels “by the weekend”, The Times says, if she wants to put her amended deal to MPs next week. The Commons is due to vote on the deal by 12 March.

Cox will meet EU officials in Brussels today in search of guarantees over the backstop plan to avoid border checks in Ireland.

He has described reports that he had abandoned his efforts to win a unilateral exit mechanism or a time limit for the backstop as “misunderstood fag ends dressed up as facts”.

Meanwhile, May has been warned she must whip her MPs to keep a no-deal Brexit on the table. Senior Eurosceptics fear that allowing MPs to block no deal would be a mistake because Brussels would then regard Britain as a soft touch.

Iain Duncan Smith said: “It is crystal clear that the Government has to keep no deal on the table and whip against an extension. That will make the EU sit up and understand that we are serious. It won’t give anything until these votes are done.”

Jacob Rees-Mogg, said: “The Government must whip for Government policy and manifesto.”

The Daily Telegraph says two Cabinet ministers have made a similar demand, with one saying a whip would be the “right approach” and consistent with the prime minister’s policy of keeping no deal on the table.

As tension mounts, John Allan, president of the CBI, has raised the stakes further by warning that delaying Article 50 might lead to an “even steeper cliff” in the summer than leaving at the end of March with no deal.

He said: “We can take the Prime Minister’s path. A deal that delivers tariff-free trade and transition. It’s not perfect, but we can work with it.

“And then there’s the other choice on the table. More delay. More circling. Perhaps only to be flung off a steeper cliff in the summer.”

The UK is currently scheduled to leave the European Union on 29 March.