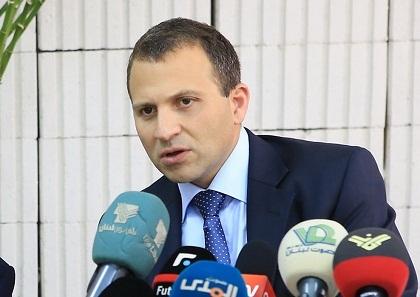 “We are not in a battle against anyone and let no one seek protection from their sect,” Bassil said after the weekly meeting of the Strong Lebanon bloc.

“We are not concerned with the ongoing sectarian clash” over the file of corruption, Bassil added.

“Ex-PM Fouad Saniora is a red line, because he is a statesman par excellence,” Daryan warned. “We pride ourselves in him and we will defend him against any unjust accusation,” he said.

Bassil meanwhile reminisced the period that preceded the election of President Michel Aoun.

He said: “The ‘Impossible Acquittal’ battle was not a political battle against a political group, but rather a reform battle that the FPM carried out and led to a law that obliged the Finance Ministry to release financial accounts.”

‘Impossible Acquittal’ is a book released by the FPM in which the movement argues that public funds were spent by the governments of Rafik Hariri, Fouad Saniora and Saad Hariri without proper auditing.

“We have decided to start with the issue of lifting bank secrecy and we have drafted a law that has been signed by 10 MPs from the Strong Lebanon bloc,” the FPM chief added.

“The issue of lifting bank secrecy does not involve all people, but is rather confined to those in office starting by the president of the republic, and it can only happen through filing a lawsuit,” Bassil clarified.

He added that the proposed law would apply to all state officials and civil servants during their time in office and for another five years after they leave their posts.

Bassil also revealed that the bloc intends to submit a draft law for combating the spread of “fake news.”

“Rumors are like bullets and can be considered an assassination method,” Bassil added, referring to corruption accusations against political officials and parties.