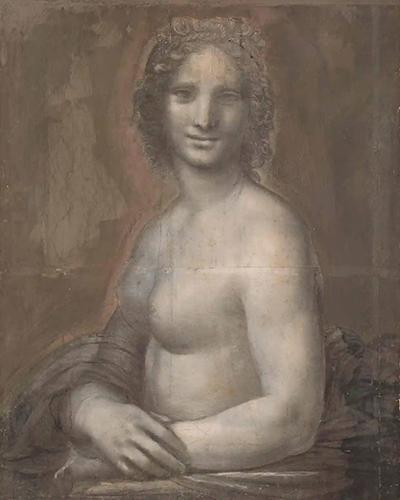 The Louvre thinks the great Renaissance master might be behind the charcoal sketch known as the Monna Vanna, and the sitter might not be a woman

Leonardo da Vinci’s studio was a fun place. When they weren’t playing music and trying on clothes, he and his young assistants – among them the good-looking pickpocket Salaì – enjoyed making rude jokes. For that is what the Monna Vanna is. This charcoal drawing of a naked woman, a nude version of the Mona Lisa posed just like his renowned portrait, goes on exhibition in Paris later this year for Leonardo’s 500th anniversary. The Louvre has detected Leonardo’s own hand in it – evidence of his subversive sense of humour.

The Mona Lisa, which Leonardo worked on obsessively for years and kept with him until his death in 1519, is a painting of veiled ambiguities. Lisa Gherardini del Giocondo, the Florentine woman who posed for it, wears a diaphanous silk headcovering almost too thin to see, and subtle mysteries resonate from her shadowed eyes to the distant riverscape. The Monna Vanna (it translates as “vain woman”) is a blunt travesty preserving Leonardo’s own sly interpretation of his masterpiece.

Ever since Marcel Duchamp drew a moustache and goatee on the Mona Lisa in 1919, many people have seen this “woman” as a man – and the atmosphere in Leonardo’s studio was far from strictly heterosexual. There is a drawing by him depicting his beautiful painting St John the Baptist, but instead of ending at the waist as the painting does, the sketch shows a robust erection. Leonardo was twice accused of homosexuality (a capital offence in Renaissance Europe), which may be one reason he left Florence to work in Milan. There, wrote his biographer, Giorgio Vasari, in 1550, “he took for his assistant the Milanese Salaì, who was most comely in grace and beauty, having fine locks, curling in ringlets, in which Leonard greatly delighted …”

Could Salaì have been the model for the Monna Vanna? The muscular left arm strongly resembles that of a semi-naked Bacchus (or maybe St John) with long curly hair from Leonardo’s workshop, now hanging in the Louvre. The “nude Mona Lisa” may be a portrait of this wild youth, who died in a fight in 1524. One thing is for sure – the fluid gender of this nude shows why Leonardo is still modern 500 years after his death.