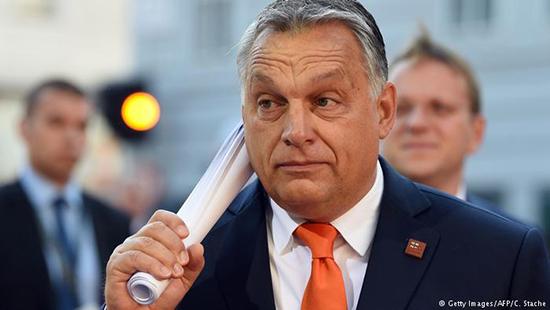 Viktor Orban’s Fidesz party faces suspension or expulsion from the European People’s Party, the largest political bloc in the EU Parliament. EPP chief Manfred Weber says that could be avoided if Orban does three things.

EU lawmaker Manfred Weber pledged to “try one last time” to keep Hungary’s Fidesz party in the European People’s Party (EPP), the association of center-right parties in the European Parliament, as it prepares to debate Fidesz’s exclusion.

The EPP, which also includes Germany’s Christian Democrats and Christian Social Union, has more lawmakers than any other group in the Brussels assembly. German-born Weber leads the conservative faction.

“Viktor Orban must immediately and permanently end his government’s campaign against Brussels,” Weber said in an interview published on Tuesday.

Secondly, the Hungarian prime minister should apologize to EPP’s member parties, which number around 50 mostly Christian-Democratic political groups. Lastly, Orban should allow the George Soros-backed Central European University (CEU) to keep its headquarters in Budapest and be once again allowed to give out US diplomas.

Orban has long irritated Brussels officials with his moves against an independent judiciary and media, his rejection of migrants, as well as campaigns targeting the Hungarian-born billionaire Soros. In recent weeks, however, tensions were once again inflamed by an Orban-backed campaign against Soros and EU Commission head Jean-Claude Juncker. Last month, Orban’s government started posting tax-funded billboards of a grinning Soros and Juncker, saying they were planning migration incentives which “threaten Hungary’s security.”

In response, the EU Commission slammed the claims as “at worst downright factually incorrect or at best highly misleading.”

The latest row also made waves in the EPP, which in 2014 ran Juncker as their top candidate for the EU Commission president. Manfred Weber aims to replace Juncker following the EU election in May.

On Monday, the EPP said it received motions from 12 of its member parties to vote on booting Orban’s Fidesz. Juncker also told Germany’s ZDF broadcaster he would support the exclusion of the Hungarian party.

Meanwhile, Fidesz said the campaign against Juncker and Soros would end by mid-March. The Hungarian party also said it does not want to leave the EPP and its goal is to strengthen “anti-immigration forces” within the association. Still, Orban branded the conservatives calling for his party to be excluded from the EPP “useful idiots” of the left on Monday.

“The decision now needs to be made in Budapest,” he said, describing the values of his Christian-Democratic bloc as “non-negotiable.”

The EPP is set to vote on Fidesz’s future on March 20.