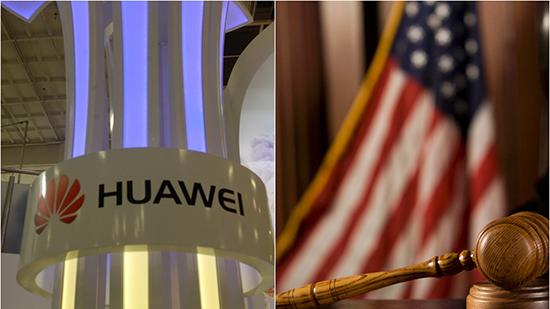 Russia  Today
The Huawei row between the US and China has apparently taken a new turn as the company has reportedly decided to sue the US government itself. While the case appears to be a no-go, it could still be detrimental to Washington.

Chinese tech giant Huawei has seemingly opted to retaliate against the scaremongering campaign launched by Washington by challenging the US narrative and winning a right to publicly defend itself. The firm is considering filing a lawsuit against the US government, accusing it of basically punishing Huawei without prior legal process, the New York Times reports, citing anonymous sources, who are “familiar with the matter.”

The potential legal action would challenge a section of last year’s defense spending authorization law, which barred US government agencies from using Huawei products for some “security reasons.” According to the paper’s sources, the tech giant would argue that the motion basically amounts to a “bill of attainder” – or a legislative act singling out a person or an entity for punishment without trial.

Huawei is expected to announce the suit later this week, although its decision is reported to be not final and the company might still change or abandon its plans. If it decides to proceed, it would likely file the lawsuit in the Eastern District of Texas, where the company’s American headquarters is located.

The chances of a Chinese company winning a controversial lawsuit against the US government in a US court does not look particularly bright, analysts believe. Even though “the US constitution explicitly rules out this kind of acts,” there have still been “precedents” when such measures have been applied, Joseph Cheng, a Hong Kong-based political scientist and a professor at the City University of Hong Kong, told RT, adding that Washington believes it has a “strong case” anyway.

All successful cases of this kind “involved domestic litigants, not foreign ones, let alone foreign governments,” Radhika Desai, a professor at the Department of Political Studies, University of Manitoba, warned. Huawei’s case, meanwhile, so far resembles that of the Russian cybersecurity firm Kaspersky Lab, whose products were also barred from being used by US federal agencies back in 2017 – for the very same “security reasons.”

Kaspersky then filed two lawsuits, arguing that the actions of the US authorities amounted to a bill of attainder but they were both dismissed in May 2018 as a judge called the motivation of the US Congress “legitimate.”

However, even with the odds being against it, Huawei still has much to gain from this suit while having almost nothing to lose. Washington, on the contrary, might find out at some point that even its victory in this case could in fact turn out to be hollow.

The US has so far spared no efforts as it seeks to convince its allies all over the world that Huawei – one of the leaders in the field of 5G telecommunication technologies development – poses a grave risk to their national security. However, what the US scaremongering campaign has been lacking all this time is proof of these bombastic statements.

At the same time, the US did not need to prove anything because it didn’t give Huawei an opportunity to publicly defend its case and challenge Washington’s assertions. And that is apparently what Huawei plans to change now.

At the very least, the Chinese company “would like to demonstrate that it is not the guilty party,” Cheng said. A court case will “help in a sense that the US side would have to present its evidence while the Chinese side will be able to defend its case,” the analyst explained.

Apart from that, this whole issue gives China an opportunity to state with a good reason that, in the absence of a court case, the treatment given to Huawei by the US is not fair as it has not been given a right to defend itself as part of a due process.

Collapse of US house of cards

Even if Huawei loses the case, it can still strike a blow to the US’ plans of undermining its expansion – at least to some extent. The lawsuit might very well expose Washington’s true reasons behind this whole fight against the Chinese giant, knocking down the house of cards Washington carefully built to convince its allies to stop even looking at the Chinese tech.

“Huawei is potentially in a win-win situation. If these countries actually apply the law, Huawei can win. If they want to defeat Huawei, they will have to bend the law, as the US did recently in the case launched by Russian tech company, Kaspersky,” Desai explained.

The US and Canada, which like to claim they are defending freedom and democracy from nefarious autocrats around the world, have in fact “always bent the law to suit national interests,” the University of Manitoba professor noted. When Washington and Ottawa “do so again in such a high profile case … China will also win because it will have demonstrated that western ‘universalist’ rhetoric is just that, mere rhetoric,” he added.