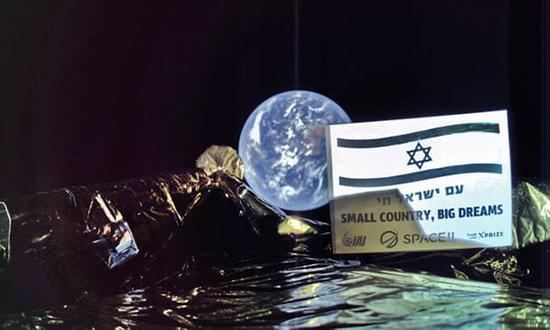 An Israeli spacecraft on its maiden mission to the moon has sent its first selfie back to Earth, mission chiefs said on Tuesday.

The image showing part of the Beresheet spacecraft with Earth in the background was beamed to mission control in Yehud, Israel – 23,360 miles (37,600km) away, the project’s lead partners said.

The partners, NGO SpaceIL and state-owned Israel Aerospace Industries, launched the unmanned Beresheet – Hebrew for Genesis – from Cape Canaveral in Florida on 22 February.

The 585kg (1,290lb) craft took off on a Falcon 9 rocket from the private US-based SpaceX company of entrepreneur Elon Musk.

The trip is scheduled to last seven weeks, with the Beresheet due to touch down on 11 April.

The Israeli mission comes amid renewed global interest in the moon, 50 years after American astronauts first walked on its surface.

China’s Chang’e-4 made the first-ever soft landing on the far side of the moon on 3 January, after a probe sent by Beijing made a lunar landing elsewhere in 2013.

For Israel, the landing itself is the main mission, but the spacecraft also carries a scientific instrument to measure the lunar magnetic field, which will help understanding of the moon’s formation.

It also carries a time capsule loaded with digital files containing a Bible, children’s drawings, Israeli songs, the recollections of a Holocaust survivor and the Israeli flag.

After China earlier this year, and now Israel, India hopes to become the fifth lunar country in the spring with its Chandrayaan-2 mission. It aims to put a craft with a rover onto the moon’s surface to collect data.

Japan plans to send a small lander, called Slim, to study a volcanic area in about 2020-21.

As for the Americans, who have not been back to the moon since 1972, a return is now the official policy of Nasa, according to guidelines issued by Donald Trump in 2017.

Nasa, which has installed equipment on Beresheet to upload its signals from the moon, has invited private sector bids to build and launch the American probes.

The US space agency plans to build a small space station, dubbed Gateway, in the moon’s orbit by 2026, and envisages a manned mission to Mars in the following decade.

We made a choice…

… and we want to tell you about it. Our journalism now reaches record numbers around the world and more than a million people have supported our reporting. We continue to face financial challenges but, unlike many news organisations, we haven’t put up a paywall. We want our journalism to remain accessible to all, regardless of where they live or what they can afford.

This is The Guardian’s model for open, independent journalism: free for those who can’t afford it, supported by those who can.Readers’ support powers our work, safeguarding our essential editorial independence. This means the responsibility of protecting independent journalism is shared, enabling us all to feel empowered to bring about real change in the world. Your support gives Guardian journalists the time, space and freedom to report with tenacity and rigour, to shed light where others won’t. It emboldens us to challenge authority and question the status quo. And by keeping all of our journalism free and open to all, we can foster inclusivity, diversity, make space for debate, inspire conversation – so more people have access to accurate information with integrity at its heart.

Guardian journalism is rooted in facts with a progressive perspective on the world. We are editorially independent, meaning we set our own agenda. Our journalism is free from commercial bias and not influenced by billionaire owners, politicians or shareholders. No one steers our opinion. At a time when there are so few sources of information you can really trust, this is vital as it enables us to give a voice to those less heard, challenge the powerful and hold them to account. Your support means we can keep investigating and exploring the critical issues of our time.

Our model allows people to support us in a way that works for them. Every time a reader like you makes a contribution to The Guardian, no matter how big or small, it goes directly into funding our journalism. But we need to build on this support for the years ahead. Support The Guardian from as little as $1 – and it only takes a minute. Thank you.