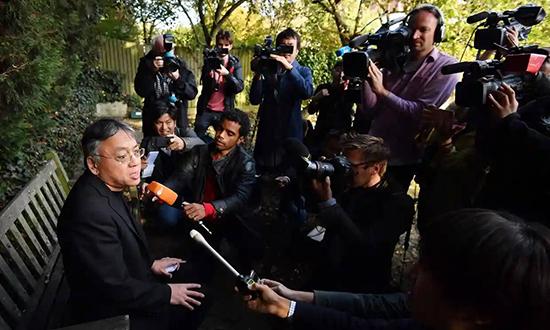 The Swedish Academy will award laureates for both 2018 and 2019 this autumn, after a sexual scandal forced them to postpone last year’s prize

The last Nobel laureate, British author Kazuo Ishiguro, speaking to the media after he was announced as the winner of the 2017 prize. Photograph: Ben Stansall/AFP/Getty Images

Two Nobel prizes in literature will be awarded this year, to make up for the lack of one in 2018 while the scandal-plagued Swedish Academy attempted to get its house in order, it was announced on Tuesday.

Last year’s Nobel was withheld for the first time since 1949 after the Swedish Academy, the august institution that selects the winners, was hit with a sexual misconduct scandal that saw the husband of one member imprisoned for rape. Following a meeting on Tuesday, the Nobel Foundation, which executes Alfred Nobel’s will, announced that “the steps that the Swedish Academy has taken and intends to take will create good opportunities for restoring trust”, and that laureates for both 2018 and 2019 will therefore be announced this autumn.

The most significant change to the prize is the appointment of five independent and external members, who will help the Swedish Academy to select the Nobel laureates “for the next few years”. How the winner is chosen has long been a closely guarded secret: what is known is that around 200 nominations are reviewed by the Academy in February, with a shortlist decided on by May and the final five authors studied over the summer. Archives detailing the jury’s reasoning are only opened to the outside world 50 years after the event.

The Swedish Academy’s permanent secretary Anders Olsson announced the postponement of the prize last March, saying that the organisation needed to focus on “recovering public confidence” due to its handling of a string of sexual assault accusations made against Jean-Claude Arnault, husband of academy member Katarina Frostenson. Arnault was subsequently convicted of rape and sentenced to prison in October.

A series of resignations left the Academy with fewer than the required 12 members to select and announce a winner. Members were previously technically appointed for life and unable to resign, which led to several refusing to attend years of meetings in protest at decisions they disagreed with – a rule that was changed last year by King Carl XVI Gustaf.

Following the scandal, the Nobel Foundation criticised the Academy for having “cultivated a closed culture over a long period of time”. But on Tuesday, it praised the Academy in a statement, saying external voices “will add valuable new perspectives” to the jury.

The Academy is also considering a time limit on membership and how it handles expulsions, the Foundation added. . And perhaps most importantly: “The Academy also no longer includes any members who are subject to conflict of interest or criminal investigations.”

“Although it will take time to fully restore confidence … the prerequisites for this are now good,” the Foundation statement read, adding: “Given the reforms that have been implemented and planned, the Swedish Academy has the opportunity not only to put the past year behind it, but also to become a better-functioning organisation in the future.”

Awarded to the author who, in the words of Alfred Nobel’s will, has written “the most outstanding work in an ideal direction”, the literature laureateship is worth 9m Swedish krona. British novelist Kazuo Ishiguro was the last recipient, in 2017.

Last year, Guadeloupean author Maryse Condé was awarded an “alternate Nobel”, the New Academy prize in literature, a one-off award intended to fill the void left by the cancellation of the official prize.