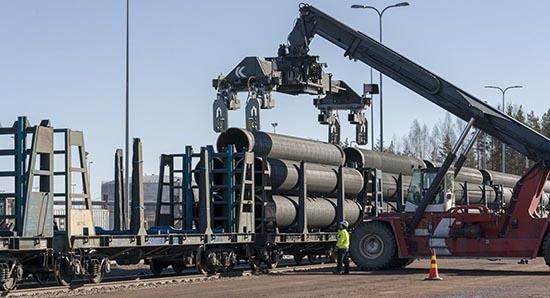 –    In 2018, Japan restarted five nuclear reactors, seven years after they were shut down following the 2011 Fukushima disaster.

–    Japan’s imports of LNG spiked after the accident, helping to drive up prices for LNG across Asia.

–    The restart of nuclear reactors could result in a drop in LNG imports by about 6 percent, according to the EIA.

–    Cheniere Energy (NYSEMKT: LNG) jumped more than 3.5 percent in premarket trading following a Wall Street Journal report that said China and the U.S. are close to signing a trade agreement that could see China purchasing $18 billion of LNG.

–    TransCanada (NYSE: TRP) announced the startup of its Mountaineer Xpress project, a natural gas pipeline that will ferry gas from Appalachia to Kentucky, Tennessee and Mississippi.

Oil started off the weak on a soft note, but was firming up by mid-day Tuesday.

U.S.-China near trade deal. The Wall Street Journal reported that the U.S. and China are close to a trade deal that would consist of China lowering tariffs and restrictions on American farm, chemical, auto and other products while the U.S. would remove most or all tariffs put on Chinese goods last year. Obstacles remain and both sides face domestic pressure not to concede too much. The deal could include an $18 billion purchase for LNG from Cheniere Energy. Meanwhile, Reuters reports that China will probably make some concessions in the trade negotiations in order to give the U.S. a face-saving win, but Beijing will not fundamentally alter the way it conducts trade in the way that the U.S. government wants.

U.S. offers SPR sale. The U.S. Department of Energy said last week that it was offering up six million barrels of light sweet oil from the strategic petroleum reserve (SPR). The sale was the result of previously signed legislation although it could be fortuitously timed for the spring as the oil market begins to tighten.

OPEC+ to defer decision until June. The OPEC+ coalition is likely to defer a major policy decision until its June meeting in Vienna, rather than make an early decision in April as was thought to be possible. Sources told Reuters that as of now an extension of the production cuts is the most likely scenario.

Libya’s Sharara field restarts. Libya’s largest oil field, the Sharara field, is in the process of restarting. The 300,000-bpd field has been shut since December, so its restart will undercut global oil prices. “The main development has been the restart of El Sharara,” Olivier Jakob, analyst at Petromatrix, told Reuters. “It’s a new input which is on the bearish side.”

U.S. shale wells drilled too close together. In a blockbuster report, the Wall Street Journal reported that the U.S. shale industry is encountering disappointing results by packing shale wells too closely together. The “parent-child” well problem is only starting to become known, but a growing body of evidence suggests that additional wells situated in close proximity to the original well can cannibalize overall production. The WSJ found that wells placed just 275 feet apart can produce as much as 40 percent less than wells placed 600 feet apart. The results call into question years of hype about intensifying drilling operations.

Australia to import LNG. Australia is vying for the top spot as the world’s largest LNG exporter. But with so much gas earmarked for exports, and declining domestic production in parts of the country, Australia’s southern regions may need to begin importing LNG.

Elon Musk shuts Tesla stores. In order to support the $35,000 price tag for the much-hyped Model 3, Elon Musk decided to close down all of Tesla’s (NASDAQ: TSLA) retail stores and shift to online sales only. “Tesla had been talking about expanding stores, and all of a sudden they are closing them. To me, this signals a huge financial concern and a possible cash-flow issue for Tesla,” Alex Chalekian, the founder and CEO of Lake Avenue Financial, told Bloomberg in an interview. Chalekian’s firm had a stake in Tesla but sold its shares.

South Dakota seeks to penalize pipeline protests. Before construction begins on the highly controversial Keystone XL pipeline, the governor of South Dakota has proposed a bill that would place liability on people who engage in “riot boosting,” which environmental groups say would violate free speech. The proposal would also require pipeline companies to chip in funds for policing.

Oil majors lobby to kill EV tax credit. Seeing a threat to their sales, oil producers and refiners have lobbied the U.S. Congress to kill the $7,500 federal tax credit for electric vehicles. The tax credit expires after individual automakers reach 200,000 EVs sold, a threshold already reached by Tesla (NASDAQ: TSLA) and GM (NYSE: GM). But there is talk of an extension, so the oil industry has spent heavily to lobby Congress.

Colorado proposes sweeping changes that could affect oil and gas. The Colorado legislature is considering a bill that would grant cities and counties more authority to regulate oil and gas operations in their jurisdictions. The shale industry views it as a threat to operations.

Republicans warming up to climate science. Republicans are changing their tune on climate change, becoming more open to solutions to the climate crisis, Bloomberg reports.

LNG projects held up on hesitation. Soft LNG prices and concerns over a well-supplied market have some developers holding back on greenlighting new facilities, according to S&P Global Platts.

BP to sell $7 billion in onshore assets. BP (NYSE: BP) is looking for buyers for $7 billion worth of U.S. onshore shale assets, and Bloomberg reports that the company is making progress in finding interested parties.

Chevron to double Permian production. Chevron (NYSE: CVX) said it expects to double its production in the Permian over the next five years to 900,000 bpd, a 40 percent increase from prior plans. “The shale game has become a scale game,” Chevron Chief Executive Mike Wirth said in an interview with the Wall Street Journal. “The race doesn’t go to the one who gets out of the starting blocks the fastest. The race goes to the one who steadily builds the strongest machine.” Meanwhile, Exxon (NYSE: XOM) said it would surpass 1 mb/d in the Permian by 2024.

We invite you to read several of the most recent articles we have published which may be of interest to you:

That’s all from your midweek intelligence report, we hope you enjoyed it and we´ll be back on Friday, with your latest energy market update, industry intelligence and special report.