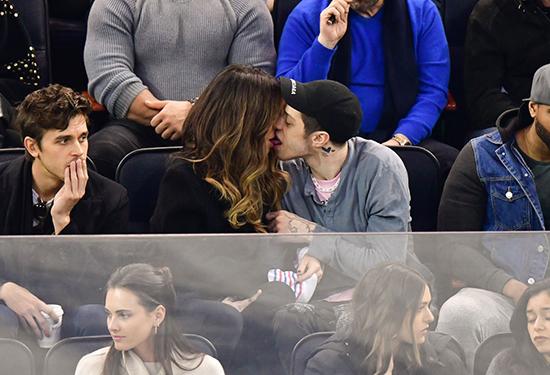 It started with a kiss—a tongue kiss, to be precise, between Pete Davidson and Kate Beckinsale, sitting in the stands at a hockey game like two high school sweethearts in a Taylor Swift song. Davidson and Beckinsale debuted as a strange new rumored couple at Sundance, where they were seen leaving a party together, and the hockey (as in both ice and tonsil) was the first activity they undertook together publicly. Needless to say, the Internet went semi-ballistic:

Among the questions their affectionate display inspired: What is Beckinsale doing with Davidson, if one subscribes to the idea that they run in very different circles of fame? What does Beckinsale’s daughter, reportedly only five years younger than Davidson, think? (Hopefully she doesn’t read the Daily Mail, where the photos ran.) Does Davidson, as fans surmised from his relationship with Ariana Grande, indeed have BDE? Is Davidson sure he wants to debut his new relationship with such fervor after only recently declaring how difficult it was to be a public boyfriend? Is it all an elaborate promotional scheme for Beckinsale’s new Amazon show, The Widow? Has couples style moved from courtside for the NBA to the stands for the NHL?

But the real frenzy began when people began to notice just who was on the other side of Davidsale’s (or Beckinson’s?) PDA fest: None other than Antoni Porowski, Queer Eye’s avocado-focused culinary expert who was seemingly distressed by the intensity of the events taking place to his left. His concerned, uncomfortable glances proved relatable to anyone who has ever sat next to people making out like they’re not famous people sitting in a full stadium.

It was then that the trio was memed and memed hard:

Porowski took the jokes in stride, posting a photo on Instagram of himself and Davidson for “no reason at all totes random,” perhaps to dissuade anyone from thinking he didn’t approve.

Which begs the question: Was it all a publicity stunt for Queer Eye season three? A collaboration among publicists? We may never know.

And in a final piece of news from the Rangers VIP section, Rami Malek, Christian Slater, and David Harbour were there, too, though they weren’t kissing.