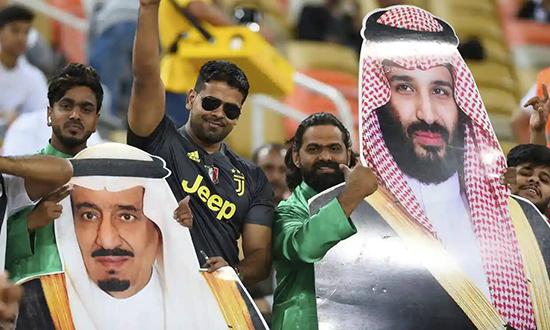 Stephanie Kirchgaessner in Washington and Nick Hopkins in London – The Guardian

There are growing signs of a potentially destabilising rift between the king of Saudi Arabia and his heir, the Guardian has been told.

King Salman bin Abdulaziz Al Saud and Crown Prince Mohammed bin Salman are understood to have disagreed over a number of important policy issues in recent weeks, including the war in Yemen.

The unease is said to have been building since the murder in Turkey of the dissident Saudi journalist Jamal Khashoggi, which the CIA has reportedly concluded was ordered by Prince Mohammed. However, these tensions increased dramatically in late February when the king, 83, visited Egypt and was warned by his advisers he was at risk of a potential move against him, according to a detailed account from a source.

His entourage was so alarmed at the possible threat to his authority that a new security team, comprised of more than 30 hand-picked loyalists from the interior ministry, was flown to Egypt to replace the existing team.

The move was made as part of a rapid response, and reflected concern that some of the original security staff might have been loyal to the prince, the source said.

The king’s advisers also dismissed Egyptian security personnel who were guarding him while he was in Egypt, the source added.

The friction in the father-son relationship was underlined, the source said, when the prince was not among those sent to welcome the king home.

An official press release listing the guests at the airport in Riyadh confirmed Prince Mohammed was not among them, adding to speculation it was intended as a pointed snub to the crown prince.

The crown prince, who was designated “deputy king” during the Egypt trip, as is customary, signed off two major personnel changes while the king was away. They included the appointment of a female ambassador to the US, Princess Reema bint Bandar bin Sultan, and that of his full brother, Khalid bin Salman, to the ministry of defence.

The latter appointment has further centralised power in one branch of the ruling family.

Although the changes had been mooted for some time, the source said the announcement was made without the knowledge of the king, who was especially angered by what he believed was a premature move to elevate Prince Khalid to a more senior role.

Royal appointments are almost always announced in the name of the king, but the 23 February decrees were signed by the “deputy king”. One expert said the title of deputy king had not been used in this way for decades.

The Guardian has been told the king and his team learned about the reshuffle via television.

The king has been trying to repair some of the damage done to the kingdom by the murder in October of Khashoggi.

Supporters of the king have been pushing him to get more involved in decision-making, to prevent the crown prince from taking more power.

The Guardian asked the Saudi authorities to comment last week.

On Monday, a spokesman for the Saudi embassy in Washington said: “It is customary for the king of Saudi Arabia to issue a royal order delegating the power to administer the affairs of the state to his deputy, the crown prince, whenever he travels abroad. That was the case during King Salman’s recent visit to Egypt.”

He said the announcements were made by Prince Mohammed in his capacity as deputy king and on behalf of the king. “Any insinuation to the contrary is simply baseless.”

The spokesman did not respond to repeated questions about changes to the king’s Saudi security detail while he was in Egypt. Nor did he comment on the dismissal of extra Egyptian security, which was said to reflect the king’s uneasy relationship with the country’s president, Abdel Fattah al-Sisi.

An official at the Egyptian ministry of foreign affairs did not respond to a request for comment, nor did a spokesman for the Centre for International Communication in Saudi Arabia.

It is understood the king was advised to not discuss the matter with other leaders or his son until his return home.

Prince Mohammed angered people last month when he walked on top of the Kaaba in Mecca, the holiest site in Islam, provoking complaints to the king by some religious scholars that the move had been inappropriate, according to a person familiar with the matter.

The prince and king have also been at odds on significant foreign policy matters, the source said, including the handling of prisoners of war in Yemen, and the Saudi response to protests in Sudan and Algeria.

“There are subtle but important signs of something amiss in the royal palace,” said Bruce Riedel, a director of the Brookings Intelligence Project and 30-year veteran of the CIA.

“A healthy crown prince is expected to welcome the king home from a foreign trip, it’s a sign of respect and the continuity of government. The royal family will be closely watching what this means.”

Another analyst said it was possible the situation was being misinterpreted.

Neil Quilliam, associate fellow of the Middle East and North Africa programme at Chatham House, said that even if Prince Mohammed made the decision to make personnel appointments during his father’s absence, it was in keeping with agreed policy to make changes in Saudi Arabia’s embassy in Washington.

“However, it would point to Bin Salman’s’ desire to press ahead with change and willingness to assert his authority,” Quilliam said. “We have seen differences between the two, notably on the issue of Jerusalem, but MBS is unlikely to push hard against his father, given that he remains dependent upon his support as a point of legitimacy.”

He added that while the prince’s absence from the airport broke protocol, there may have been any number of reasons for his absence.

The crown prince has faced international condemnation over Khashoggi, who was killed and dismembered inside the Saudi consulate in Istanbul. The Saudi government has denied any involvement by the prince, who was found by the CIA to have ordered the killing.

The CIA assessment has done little to sway the Trump administration, which enjoys a close relationship with Saudi Arabia and has sought to downplay the significance of the Washington Post journalist’s killing.