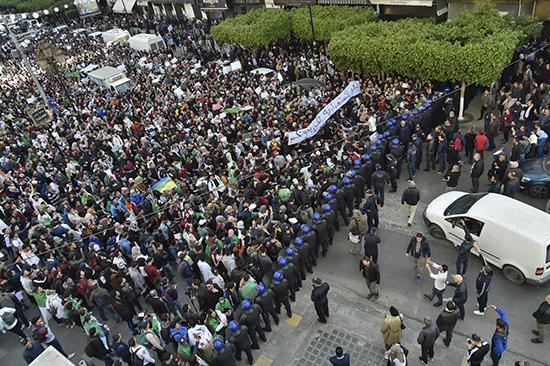 Two major branches of Algeria’s largest labour union, whose leader is close to ailing President Abdelaziz Bouteflika, have come out against the president’s candidacy for a fifth term, Reuters reported.

“The members do not want a system that is linked to oligarchs,” the Rouiba and Reghaia branches of the UGTA, which counts tens of thousands of members, said in a statement on Wednesday, according to the news agency.

UGTA’s national chairman, Abdelmadjid Sidi Said, is close friends with Bouteflika and had last year pledged support for the president’s bid for a fifth term.

Bouteflika’s decision to seek re-election has been met with widespread anger, with hundreds of thousands of people taking to the streets across Algeria and abroad over the past several days, calling for him to step down.

Several local branches of the UGTA have also expressed support for the ongoing mass protests.

The National Union of Permanent Researchers said it was suspending its ties to the UGTA over Said’s backing of the president, Algerian news outlet El Watan reported on Wednesday.

“The UGTA’s general secretary is looking to impose a fifth term [for Bouteflika] in the name of millions of workers affiliated to the UGTA without having consulted its base [and] by resorting to processes of marginalisation and exclusion of those who refuse to bow down to its abusive practices,” the NUPR said in a statement, as reported by El Watan.

Algerian war veteran groups also said that the protesters demanding Bouteflika step down after 20 years in power had legitimate concerns.

“It is the duty of Algerian society in all its segments to take to the streets,” the influential National Organisation of Mujahideen – made up of veterans, like Bouteflika, of Algeria’s 1954-1962 war of independence from France – said late on Tuesday.

Bouteflika, 81, has clung to power since 1999 despite his ill health and still intends to run for re-election in polls set for 18 April.

The country’s longest-serving president has rarely been seen in public since suffering a stroke in 2013, a fact that has prompted even more anger among Algerian protesters who want him to step aside.

The ongoing unrest poses one of the biggest challenges yet to Bouteflika and his inner circle, which includes members of the military, intelligence services and businessmen.

The Algerian army’s chief of staff, Lieutenant General Gaed Salah, on Wednesday reiterated that the military would not allow a breakdown in security, Reuters news agency reported.

“We are committed to providing safe conditions that ensure that Algerians fulfill their electoral duties,” the private Ennahar television station quoted Salah as saying.

After renewed protests on Tuesday, Algeria was largely quiet on Wednesday apart from one demonstration in the town of Bejaia, Reuters reported.

Some officials from Bouteflika’s ruling FLN party have turned up at demonstrations and several public figures have announced their resignations since the protests began.

While an anonymous call for a general strike has gone largely unheeded, the country’s leadership faces another test – an online call for a “March of 20 Million” this Friday, Reuters said.