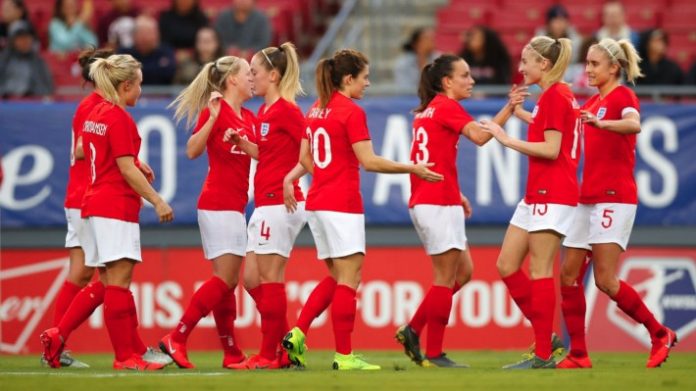 England women celebrate a goal against Japan in the SheBelieves Cup

England women’s head coach Phil Neville says his team have “bigger things to aim for” after the Lionesses won their first SheBelieves Cup.

Goals from Lucy Staniforth, Karen Carney and Beth Mead secured a 3-0 win over Japan in Tampa on Tuesday and the result bodes well ahead of this year’s Fifa Women’s World Cup in France, which starts on 7 June.

In the 2019 SheBelieves Cup invitational tournament – a tune-up event for the World Cup – England finished top of the standings with two wins and a draw from their three matches.

Speaking to BBC Sport head coach Neville said: “It was a sensational performance. I wasn’t that bothered before the tournament whether we won or lost, I just wanted to see an improvement and we go home knowing we are definitely in the right direction.

“We just keep listening to the USA, Japan and Brazil talk about how good we are. But we remain humble, have fun and enjoy moments like this.

“You don’t get many chances to get your hands on a trophy. It is my first as a manager so I am just going to enjoy it. It’s great for everybody but I think we have bigger things to aim for. We will enjoy it but tomorrow we will look forward to the April camp.”

Fifa’s website said that England’s progression under Neville has taken a “significant step forward” and they showed their “mental fortitude” against Japan, one of their group opponents at the World Cup.

Chelsea Ladies star Carney, who scored in the 3-0 win, added: “There’s a belief – it’s hard to put my finger on it, but it feels really good.

“I think no one’s really fazed by anything. This group seems to have confidence. The manager, he demands more from us. We went in at half-time three-nil up and he still wanted more and more from us. It just feels really, really good.”

The Guardian reports that the “manner of Lionesses’ performance will excite ahead of France”.

Speaking on BBC former England forward Sue Smith said that the win at the SheBelieves Cup will send out “a statement to the rest of the world”. Smith said: “That was a fantastic, professional performance. England had to defend in the second half and they did. It was brilliant from an England perspective.”

Alex Scott, the ex-Arsenal and England star, praised the team for their “clinical” finishing. She said: “Japan’s defending could have been better but England have improved so I want to look at those positives. It’s that winning feeling. There are so many positives to take from this tournament and you get to pick up silverware.”

At this summer’s Fifa Women’s World Cup England have been drawn in group D with Scotland, Argentina and Japan.

In preparation Neville’s side will play four warm-up matches. In April England play against Canada and Spain, in May they face Euro 2017 runners-up Denmark and in June they take on New Zealand.