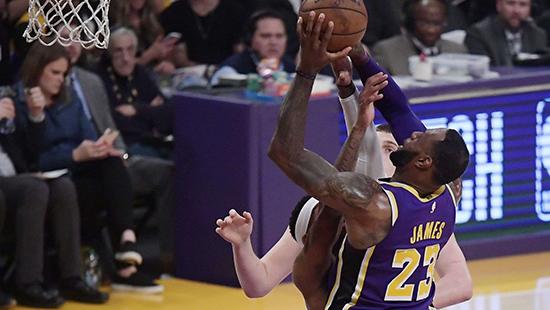 James, 34, the Los Angeles Lakers star who grew up in Akron, Ohio, one-upped his hero Wednesday with his 32,293rd point on a driving layup in the second quarter against the Denver Nuggets, getting fouled in the act and hitting the ensuing free throw.

“Can’t even front. This is going to be UNREAL!! Wow man,” James tweeted later.

James is among the last active players who were old enough to witness Jordan lead the Chicago Bulls to six championships in eight years during the 1990s.

Past and present NBA players, including Magic Johnson, tweeted their congratulations to James.

Five of the top six scorers in NBA history played for the Lakers, who signed James as a free agent last summer. Although James has played only 47 games for Los Angeles, he has charged up the career scoring chart in that time: He passed Dirk Nowitzki for sixth place in October, and he passed Wilt Chamberlain for fifth place in November.

James began the night averaging 27.0 points, 8.7 rebounds and 8.0 assists while hitting 51 percent of his shots and playing 35.7 minutes per game for the Lakers. He would have hit this milestone earlier in the winter, but a midseason groin injury on Christmas sidelined him for 17 games over five weeks — the longest injury absence of his career.

James has played in the last eight consecutive NBA Finals, and he hasn’t missed the playoffs since 2004-05, his second NBA season. After they began the night 5 ½ games out of a playoff spot, the 10th-place Lakers would need an incredible late-season run — and an extraordinary collapse by two teams in front of them — to avoid missing the playoffs for a franchise-record sixth consecutive season.

European roundup: Atlético slip again as Inter close in on Serie A title

How table tennis changed the world, 50 years on