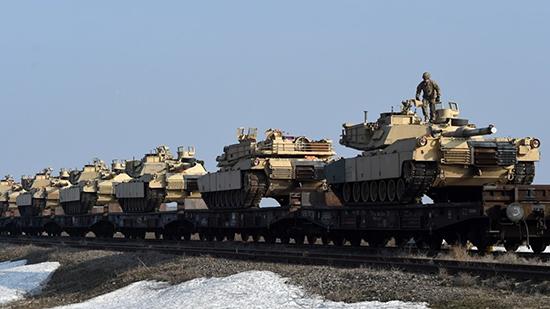 Russia  Today
Cries over scary “Russian aggression” were yet again produced by a US military bigwig, who asked the Senate for more of everything for his troops. This, however, might simply be a marketing stunt, RT was told.

General Curtis Scaparrotti, the head of EUCOM and the supreme NATO commander in Europe, faced the Senate Armed Services Committee on Tuesday, focusing on the scary – yet elusive – “Russian aggression.” While the US still dominates, the Russian “threat” is growing steadily, the official claimed without offering any proof.

To fix that, his command needs more of everything – troops, planes, ships… and naturally, cash.

“Of concern is my intelligence, surveillance and reconnaissance capacity given that increasing and growing threat of Russia. I need more ISR,” Scaparrotti said.

His stance is in line with the geopolitical strategy Washington has been pursuing for about a century – to prevent any viable rival for the US from emerging in Eurasia, geopolitical expert Dr. Pierre-Emmanuel Thomann believes.

“After the cold war, when the USSR disappeared, they continue this policy of encircling Eurasia with US and NATO bases to prevent Russia, but also China to emerge as credible strategic rivals against the power of the United States,” Thomann told RT.

The focus on reinforcing NATO’s presence in the Black Sea, announced by Scaparrotti, is quite obvious as well, given the strategic value of this body of water. Bringing it under control would allow the US to cut off Russia’s access to the “warm seas of the south and the Middle East,” Thomann said.

Apart from the aforementioned strategic goals, keeping tensions with Russia high is simply good for business, according to Thomann. Certain actors in the US are “willing to continue arms race with Russia and China and also to have a new Cold War,” thus poking Russia to prompt a reaction is crucial to portraying it as a big, scary enemy.

“The easing of tensions is not suitable for the military-industrial complex and we know that the American government is willing to sell its weapon systems to Europeans. So it’s interested in making more tensions in Europe and portraying Russia as a new enemy to make its own weapon sales rise in Europe,” Thomann stated.