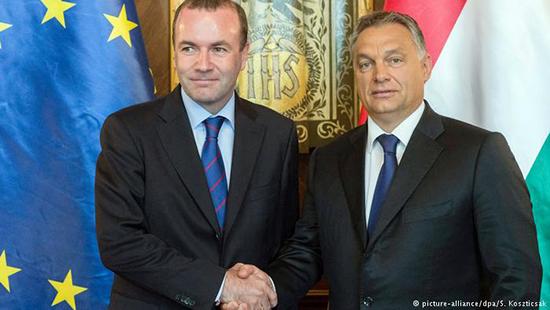 The European Peoples Party is set to decide on whether or not to kick Viktor Orban’s Fidesz party out of the group. If this happens, the EPP leadership should go as well, says journalist Stephan Ozsvath.

Hungarian Prime Minster Viktor Orban has taken flak from members of the European People’s Party (EPP) for calling his critics “useful idiots,” saying their complaints only help the political left. Orban isn’t concerned by critical voices within the EPP — though his Fidesz party belongs to the EPP’s group in the European Parliament — and neither is he worried about political lightweight and EPP chairman Manfred Weber. Weber, a member of Bavaria’s conservative Christian Social Union (CSU), has drawn countless lines in the sand in a hopeless effort to reign in Orban.

Orban, it seems, is firmly in control of the situation. Weber must count on Hungary’s backing if he hopes to become president of the European Commission, and Orban knows this all too well. The Hungarian leader is on good terms with Weber, yet continues to have his country’s media dish out vitriol against European Commission President Jean-Claude Juncker, among others. Orban’s trademark style of populism is characterized by permanent attacks on his political enemies and singling out new adversaries and scapegoats. Those scapegoats include Jewish billionaire George Soros, whom Hungarian media has been accusing for four years of pushing European Union leadership in Brussels to allow more migrants into the bloc.

Weber’s CSU is aware of this, yet also appreciates Orban’s tough stance on migrants, compared to the more moderate policies of German Chancellor Angela Merkel, a member of the CSU’s sister party, the Christian Democratic Union (CDU). The German economy also has close ties to manufacturing in Hungary. Carmakers Mercedes, Audi and BMW have invested billions of euros in the country, which boasts low taxes, highly-skilled workers and weak labor unions. Audi’s headquarters, incidentally, is based in the electoral district of Horst Seehofer, who until recently lead the CSU. So no wonder the CSU has not been particularly critical of Orban, who in turn benefits handsomely from German companies generating tax revenue in his country. It’s a win-win situation for both sides, basically.

For years, the EPP shied away from publicly criticizing Orban, instead preferring to talk to him behind the scenes, hoping this would be more effective. At the same time, the EU’s conservatives were eagerly pointing out controversial figures within the Social Democratic group in the European Parliament, such as Romania’s Victor Ponta and Liviu Dragnea. Indeed, EPP President Joseph Daul and Manfred Weber were still busily campaigning on behalf of Orban when the Hungarian leader was already going after the privately-run Central European University and critical civil society groups. At which point “Stop Brussels” posters had already popped up across Hungary — paid for, incidentally, by European tax payers! Orban’s oligarchs have shamelessly lined their own pockets with EU funds, including his own son-in-law, despite a thorough investigation by the bloc’s anti-fraud body, OLAF. Hungarian authorities, meanwhile, have been dragging their feet on the case.

Ingeborg Grässle, who sits on the European Parliament’s budgetary control committee and is a member of the EPP, wants to put an end to this kind of embezzlement of EU funds. She supports the newly established European Public Prosecutor’s Office, which may one day have the power to act throughout the entire bloc. Unsurprisingly, Orban rejects the body. Meanwhile, EPP member Frank Engel has accused Orban of having created an “illiberal” and deeply corrupt regime, and has questioned why the Hungarian leader has not been expelled from the group. Yet so far, nobody within the EPP has heeded Grässle’s and Engel’s calls for a tougher stance on Orban — which is bizarre, as the group has always said it champions “European values.” The EPP’s leaders have as a result become accomplices of Orban; they’re his “useful idiots.”

The EPP must regain credibility

About a dozen parties who are part of the EPP have written to Daul objecting to Orban’s populist politics. Yet their criticism also puts Daul and Weber under pressure. The two men have protected Orban for years and are partly to blame for his accumulation of power, which now makes him a serious threat to the EU. Orban no longer belongs in the EPP. And neither do Daul and Weber. The group urgently needs to regain credibility. For its own sake. And for Europe.