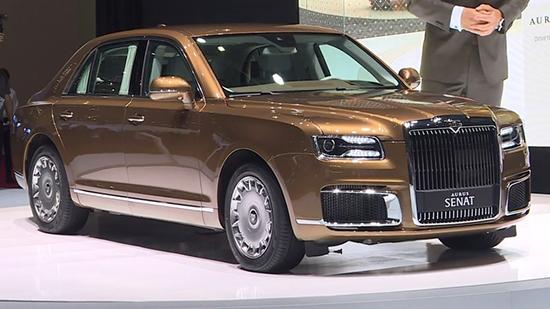 High-end Russian automobile brand Aurus made its international debut at the Geneva Motor Show. Sales of the first Kortezh series of vehicles will reportedly start next year.

The Russian producer presented its Aurus Senat Limousine L700, prominently featured during President Vladimir Putin’s inauguration in May 2018, and the Aurus Senat sedan S600 at one of the world’s leading auto shows.

The armored limousine, part of the ‘Kortezh’ (motorcade) line, reportedly measures 6.6 meters long and has a massive 4.3-meter wheelbase. The sedan, which is 5.6 meters long, boasts a wheelbase that spans 3.3 meters.

The vehicles are equipped with the same hybrid powertrain consisting of a 4.4-liter turbocharged V8 engine and an electric motor, both linked to a nine-speed automatic transmission. The engine enables acceleration from 0 to 100kph in approximately six seconds, while the limousine can accomplish the same task in about nine seconds.

Aurus expects to start deliveries of its cars to Europe at the end of 2020, according to CEO Franz Gerhard Hilgert. Retail prices will reportedly start at 10 million rubles (US$152,000).

“I cannot say for sure when deliveries to Europe will start. It depends on customers, and we need to complete some technical aspects to obtain a certificate of compliance for the European market. We hope that we will be able to deliver the first cars to Europe at the end of next year,” Hilgert told Sputnik.

The producer is planning to start manufacturing vehicles more tailored to the general public, such as sedans, minivans, and SUVs.