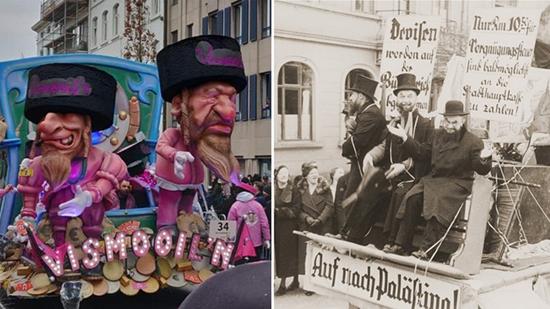 It is the religion of people too lazy to accept the complexity of reality.

On Sunday, a float rolled down the streets of Aalst, a Belgian town, for carnival. It featured two grotesque caricatures of Hasidic Jews, hooked noses, hands reaching out for money, and a rat sitting on money bags. That’s 2019. A second float, pictured above—in Marburg, Germany, in 1936—featured celebrants dressed as Orthodox Jews. The only real difference is that the former was more elaborately and professionally executed, and if anything more grotesque.

Anti-Semitism, or, to speak more plainly, Jew hatred, is the animus that never dies. Like some malignant virus, it always lies dormant, ready to wake. Like other viruses, it may be, at various times, more or less virulent, more or less lethal. There probably will not be a massacre of Jews in Belgium in the next few years. What happened a few years after the float rolled down the streets of Marburg requires no elaboration.

In the wake of the Holocaust, the deliberate killing of Jewish, non-Israeli civilians is usually condemned across the political spectrum (butcheries of Israeli civilians being often excused as an understandable expression of Palestinian frustration). But those are easy sentiments, because it costs nothing to sympathize with dead Jews as opposed to standing up for live ones. The virus survives.

Some physical threats persist. A young male Jew wearing a yarmulke in the cities of so-tolerant Scandinavia (Malmö, for example), or even on some of the streets of Paris in laicized France, risks a beating or worse. And sometimes terrorists of the left or right decide to shoot up a supermarket, a community center, or a synagogue. When they do, the press usually describes them as lunatics rather than ideologues. After the bodies have been taken to the morgue and the blood has been mopped up, it is easier to rationalize the murders that way.

But in the West, no one is going to massacre Jews or send them to concentration camps. Other parts of the world—the Arab world most notably—have been subject to such thorough ethnic cleansing in the recent past that there are no Jews left to pummel or kill. To be sure, that does not stop virulent anti-Semitism without Jews, a phenomenon noted in Poland under communism in its later stages, and present today in countries such as Pakistan, whose press prints cartoons indistinguishable from those in the Nazi broadsheets of nearly a century back.

Social anti-Semitism, the kind permissible in polite society, continues. But even that has changed. Once upon a time, it was a kind of establishment or upper-crust disdain for pushy newcomers, the sons and daughters of immigrants on the make. Sometimes it was subtly expressed. “Well, there goes your Semite, Hugh. A different god, a different mountaintop,” said John Gielgud in Chariots of Fire, a movie about the 1924 Olympics. In the 20th century, it was usually just doors firmly shut at clubs and universities. Why were so many hospitals with names such as Beth Israel founded in the early 20th century? In part, to give Jewish doctors a place to practice the healing arts. But social anti-Semitism, in the sense of nonviolent Jew baiting, still exists in the West, even if some posh columnists for prestige publications on the left or right are more likely to drizzle their venom on “neoconservatives” than on “hawkish foreign-policy Jews.”

Its ugliest forms have been most clearly on display in Britain of late, where the leader of the Labour Party refuses to acknowledge, and certainly act against, the persecution of Jewish members of his own party, a number of whose parliamentary members have now quit in disgust. Jeremy Corbyn’s friendship with terrorist groups, his willingness to pose near or under anti-Semitic caricatures, and his failure to do anything to suppress the vile attacks on fellow leftists who happen to be Jews are, at the moment, unique in liberal democracies. But other leaders in democracies or quasi-democracies play with Jew hatred: Why else does Viktor Orbán so insistently invoke the image of George Soros, a bogeyman that some American white nationalists have similarly summoned up? Jew hatred is of both left and right.

In the United States, anti-Semitism has taken many forms—whether it is nominally respectable professors insisting that a vast Israel Lobby controls American foreign policy, or clueless congressional representatives accusing American Jews of dual loyalties, or others speculating about diabolical financiers dominating the 2018 midterms. In each case, the unique feature of this kind of Jew hatred is the wild, aggrieved indignation that results when it is called out or rebuked.

And that takes us to the essence of anti-Semitism. It is not merely “the socialism of fools,” as the German social democrat August Bebel famously put it at the turn of the 20th century. It is a confession of weakness and fear, a belief in occult forces that explain why you or your group has failed in some way—whether it is in securing a foreign policy guided by realpolitik or justice for a group you feel for, or a lost election, or the fact that the bond markets occasionally go against you. Anti-Semitism is, in short, the religion of people too lazy to accept the complexity of reality, who hunger for enemies whose power excuses their own deficiencies, and who cannot take responsibility for why their side has not won. That is why it can be wildly contradictory: The Jews are either rootless globalist bankers or the agents of a tiny nation-state; they are either religious fanatics out to do in followers of the Prophet (in the old days, Christ killers) or godless atheists, the instruments either of bloody reaction or of no-less-bloody revolution. Either way, it is a creed for losers.

For some period of time after the Holocaust, once Americans and Europeans could bring themselves to acknowledge what had happened, open Jew hatred went into retreat. That has changed. In the form of Israel hatred—to include a denial of that state’s right to exist, a complete disregard of the threats it has faced, and simple lies about what it has done—it is now acceptable in many places. But that channel of thought quickly merges into the larger sewer, because despite their protestations, Jew haters do not really distinguish between the Jewish state and the Jews of other countries. That float in Marburg, after all, had a card on it about heading to Palestine.

Anti-Semitism is out there even in the United States. In 2017, the FBI recorded more than three times as many anti-Jewish as anti-Muslim religious hate incidents, or almost 60 percent of the total. In Europe, the European Union Agency for Fundamental Rights has now published two comprehensive reports documenting the spread and worsening of anti-Semitism in Europe over the past five to 10 years.

There are some limits to how far this old hate can go. The Jewish state has mortal enemies; it also has a larger (and more effective) military than Germany does, and a fistful of nuclear weapons. The basic norms of civilized behavior in Europe and the United States have held, although what individual Jews experience may be different from what political leaders say they will tolerate. But what is particularly scary now is that Jew hatred seems to bring with it no real penalties—indeed, it feeds waves of indignation that haters can use to their advantage.

In the end, this is less of a problem for the Jews than for everybody else. The Jews are used to their enemies, and against all odds have survived them. As the saying goes, the basic story line of most Jewish holidays is, “They tried to kill us. They’re gone. We’re still here. Let’s eat.” So it will be now as well. But what the resurgent anti-Semitism of our times—and the numbers of incidents are growing—tells us is that our societies are more troubled than we think. Confident, thoughtful, and upright people do not go in for Jew hatred; it is, rather, sick souls who do. They can be defeated only by their own: the left by the left, the right by the right, the professors by the professors, and, in the Muslim world, by Muslims. And if good people of whatever stripe choose to say nothing and do nothing, who knows where those floats will take us?

Is Turkey awaiting US election to threaten Israel? – analysis