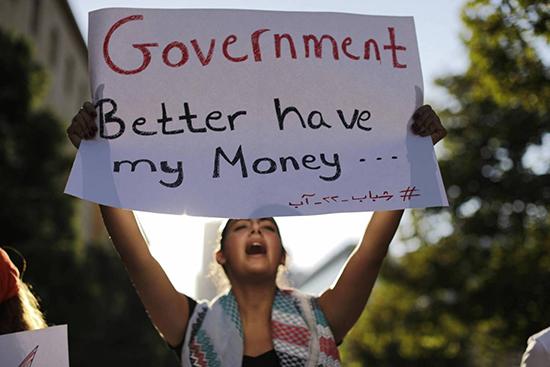 Is blaming the abysmal state of electricity, transportation, water and sewage networks on politics, while continuously spending billions on these sectors considered corruption?

BEIRUT: If a rampant underground economy, a mini-state within a state, violations of the constitution, extra-budgetary spending, and a failed social security system do not classify as corruption, then what does?

Isn’t blaming the abysmal state of electricity, transportation, water and sewage networks on politics, while continuously spending billions on these sectors considered corruption?

What about enacting a public salary increase funded by a tax hike, or failing to adopt a comprehensive policy towards Palestinian and Syrian refugees?

And let’s not forget the unconstitutional 11-month extension of the previous Lebanese Parliament’s term.

These violations, committed by those in power, are but the tip of the iceberg. While an increasing number of lawmakers are claiming to be fighting corruption, only a few of them can be considered transparent, efficient, and looking out for the public’s interest.

Despite the extensive and elaborate media campaigns making rounds in recent days, it is unlikely that those actually involved in corruption will change course and truly enact reforms.

Recent claims about fighting corruption serve to shift the conversation away from the real issues plaguing Lebanon and its existence moving forward and play right into the hands of those who are actually pushing Lebanon over the cliff.

These claims are being echoed today by those who have abandoned the battle to defend Lebanon’s sovereignty and offered one-sided concessions under the false belief that it serves the betterment of Lebanon.

In this context, it is necessary to understand that corruption in Lebanon is institutionalized. Regulating the job market or the public sector’s working hours would do little to address corruption, which has been entrenched in the psyche of the everyday citizen, forcing him to become an accomplice to achieve his goals.

Corruption has been established by a political class that claims to want to eradicate it. A class that enjoys the political cover of regional and international players, who continue to violate Lebanon’s sovereignty given the lack of a well-defined national security strategy; a strategy that should be drawn up and enforced to restore Lebanon’s sovereignty before even touching on the issue of corruption.

Sovereignty is not only about restricting access to weapons to legitimate security institutions, but enjoying an independent foreign policy and decision-making process free of internal and outside pressures.

And this requires legitimate and competent statesmen, not individuals seeking to reap in the rewards of the job.

This notion of fighting corruption before securing Lebanon’s complete sovereignty is nothing more than a slogan, one that has been recycled and used by every government to date.

Today, the ruling class is warning against an impending collapse but with no intention to save Lebanon. It is rather a last-ditch effort to collect international funds, aid, and grants, only to delay the inevitable.

Ziad El Sayegh is an expert in Public Policies and Refugee crises.