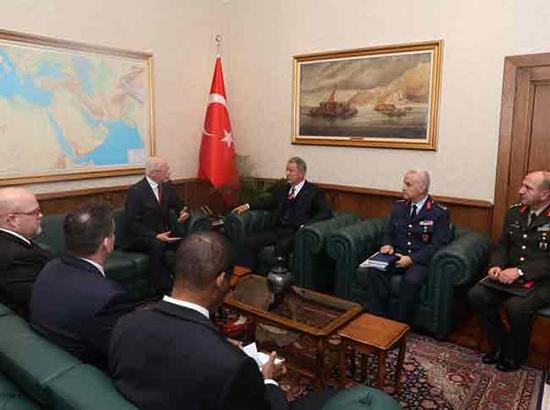 According to the statement quoted by state-run Anadolu Agency, Hulusi Akar and JamesJeffrey discussed the recent developments in Syria, Syrian northeastern town of Manbij and east of the Euphrates where the YPG controls.

During the meeting, Akar reiterated Turkey’s expectation over the finalization of the Manbijroad map between Turkey and the U.S. and its sensitivity for the territorial integrity of Syria, the statement said.

The Manbij road map focuses on the withdrawal of the YPG group from the city in order to stabilize the region.

Turkey deems the U.S.-supported YPG as an offshoot of the illegal PKK, which is listed as a terrorist organization by Turkey, the U.S. and the European Union.

Turkey’s defense chief also underlined that a projected safe zone east of the Euphrates should be free of the PKK or YPG and the safety must be secured by Turkey.

Akar also said Turkey is determined to protect its rights and interest under the international law and deals.