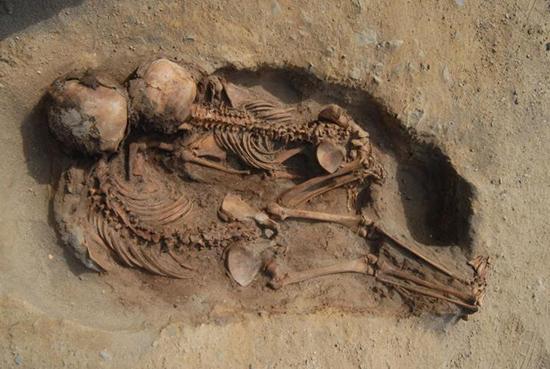 What is believed to be the biggest child sacrifice in history has been discovered in Peru, with skeletons of over 140 children unearthed at the archaeological site of Huanchaquito-Las Llamas. The mass-sacrifice site, which was dated to around 1450 A.D., also saw over 200 llamas killed—and scientists working at the site are now trying to determine what could have led to such an extreme and violent ritual.

Details of the discovery were first announced in April 2018. Since 2011, archaeologists working at the site had been finding human bodies buried in an area of approximately 7,535 square feet. Further analysis revealed the skeletons were almost entirely those of children. The slaughtered llamas were also found to be juveniles.

At the time, John Verano, a professor of anthropology at Tulane University, in New Orleans, who was analyzing the site, told National Geographic: “I, for one, never expected it. And I don’t think anyone else would have, either. It is ritual killing, and it’s very systematic.”

Verano, together with Gabriel Prieto of the National University of Trujillo, Peru, and colleagues have now published their scientific findings in the journal PLOS One. Prieto told Newsweek they believe the ritual took place over a short time period—possibly just one to five days.

Researchers said that anatomical and genetic evidence showed the children were between 5 and 14 years old. They had cut marks along their sternums and displaced ribs, suggesting their chests had been cut open and their hearts removed—indicative of a ritual sacrifice. The children were also found to come from different regions and ethnic groups. How they might have been chosen is not known—but all of them would have been in good health, “more than the average for the time,” Prieto noted.

Sacrifices—both human and animal—are found throughout history and cultures. Often, they were performed as part of a funeral or spiritual rituals.

In pre-Columbian cultures, child sacrifice is well-documented. The Incas, for example, sacrificed children during or after important events—sometimes known as a capacocha ritual. Evidence of child sacrifice is also found in Maya, Aztec and Teotihuacan civilizations. In 2016, researchers announced that a cave in Belize, called the Midnight Terror Cave, was likely the site where children were ritually killed to appease the rain god Chaac.

Huanchaquito-Las Llamas was part of the Chimu civilization, a culture that arose around 900 A.D. and was based along the northern coast of Peru. Unlike in other pre-Columbian cultures, there was little evidence of child sacrifice—until the mass grave was found.

“There was no suggestion from ethnohistoric sources or historic accounts of child or camelid sacrifices being made on such a scale in northern coastal Peru,” Verano said. “We were fortunate to be able to completely excavate the site and to have a multidisciplinary field and laboratory team to do the excavation and preliminary analysis of the material. This site opens a new chapter on the practice of child sacrifice in the ancient world.”

What could have lead the Chimu people to perform such a large-scale sacrifice ritual is not known. In the study, researchers noted that the layer of mud above the burial sediments suggests that heavy rainfall or a flood had preceded the killing. This, they said, “Could have impacted the economic, political and ideological stability of one of the most powerful states in the New World.”

“While the correlation between heavy rains and the sacrifice may be coincidental, it is tempting to hypothesize that the two events are associated, and that the mass offering of children and camelids may have been an attempt to appease the gods and mitigate the effects of a major ENSO [El Niño Southern Oscillation, which normally brings floods to Peru] event that occurred around 1400 to 1450 A.D. The sacrifice of such a large number of children and camelids constituted a significant investment of resources for the Chimu state.”

Prieto said El Nino could have caused “extraordinary” weather events along the north coast of Peru every 100 years or so. “The ENSO event dated between 1400 to 1450 A.D. was an extraordinary one, and it affected the economy of the Chimu civilization, destroying their irrigation systems, roads and even the rains might have affected the mud-brick construction of their cities,” he said. “The sacrifice was possibly performed to please the gods, asking to stop the rains and the floods.”

Elizabeth Graham, a professor of Mesoamerican archaeology at the U.K.’s University College London, told Newsweek that while the research is “impressive,” it is difficult to get away from the fact that “we lack evidence concerning why individuals claimed to have been ‘sacrificed’ were actually killed,” adding that she takes issue with the term sacrifice, which—although is sprinkled liberally in literature about the Americas—has no equivalent word in Maya and Aztec cultures.

She continued: “I infer that sacrifice is intended to mean killing a living thing specifically and solely for a god. But this rationale for killing is still an assumption and not a fact…. It remains to be proven where in the New or Old World that individuals were killed solely for a god. There are a raft of other rationales for killing, with gods usually serving as a kind of icing on a cake that is already baked….  We do know that children or infants at various times in history were killed to limit population numbers, often in times of societal stress.”