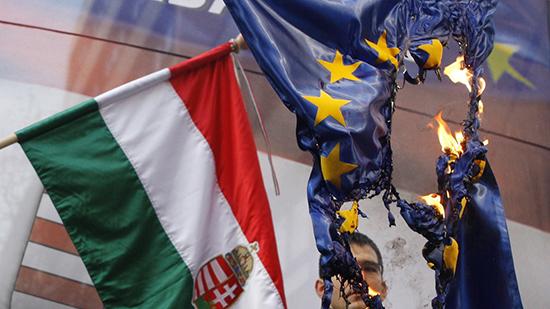 Russia  Today
Hungarian Prime Minister Viktor Orban has said that a breakup of the European Union cannot be ruled out if one part of the bloc tries to impose pro-immigration policies on another.

Quoted on the Hungarian government’s website, Orban said he could see a danger of fragmentation within the European Union.

“If we are left alone and they do not force islamisation on us, Europe can continue to live as the club of free nations,” Orban said, but added that if Brussels forces Hungary “to accept the UN migration pact or the European Commission’s decisions so as to make us fit their own Western concessive policies, a breakup [of the EU] cannot be ruled out.”

On Wednesday, Orban welcomed recent suggestions by French President Emmanuel Macron about needed reform of the EU and said it could be the “start of a serious debate” about the future of Europe.

Orban said that Macron’s proposal to reform the Schengen area policies and establish a common border force and EU asylum office are necessary — but whether Macron and Orban’s visions will align in reality is another question.

Orban has repeatedly butted heads with the EU over his reluctance to open Hungary’s borders to refugees, denouncing “Muslim invaders” and saying that no country should be forced to adopt imposed immigration policies or adhere to quotas set in Brussels.

Orban has recently come under fire for his “anti-Brussels campaigns” from the European People’s Party, of which Orban’s Fidesz is part. The EPP have even threatened to expel Fidesz over his frequent targeting of Hungarian-American billionaire George Soros and his use of anti-EU billboards.

Fidesz said on Thursday that the billboards attacking European Commission President Jean-Claude Juncker would come down and be replaced by new ones showing Orban’s plans to increase Hungary’s birth rate.