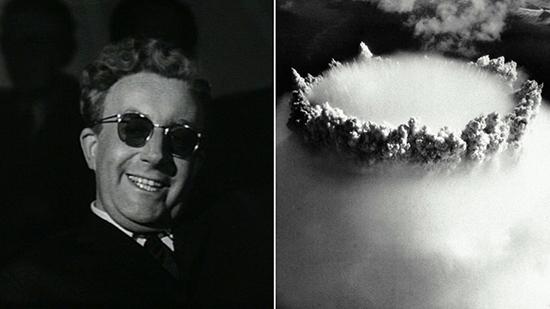 Today, humanity is confronted with an ugly paradox in that the world’s foremost peacekeepers are nuclear-tipped ballistic missiles. One bad move on the geopolitical chessboard, however, could trigger a global catastrophe.

On July 25, 1945, in the waning moments of World War II, then US President Harry S. Truman jotted the following words in his diary, “We have discovered the most terrible bomb in the history of the world.” But not terrible enough to employ them, it seems.

Just weeks later, the United States dropped atomic bombs on the Japanese industrial cities of Hiroshima and Nagasaki, indiscriminately killing some 200,000 civilians in, literally, a flash. Many others died in the years that followed from radiation poisoning and other associated illnesses. If there is a special place in hell for those who would expose the planet to such horrific weapons, Truman must certainly be there.

The historic tragedy is not without some dark irony. Albert Einstein, whose theory of relativity spearheaded the development of atomic weapons, was worried that Adolf Hitler would acquire the deadly know-how before the West. This prompted him in 1939 to write a letter to Truman’s predecessor, Franklin D. Roosevelt, advising him to expedite research into nuclear fission. American scientists, working in the secret Manhattan Project, succeeded beyond Einstein’s wildest dreams.

The famous physicist, appalled by the devastation visited upon the two Japanese cities, expressed regret over his fateful decision to warn the Americans.

“Had I known that the Germans would not succeed in producing an atomic bomb,” he said, “I would have never lifted a finger.”

Since then, the world has been forced to live with the knowledge that all life on earth could be quickly extinguished in the event of some mishap or conflict. Yet this knowledge has not stopped most governments from coveting nuclear weapons because they understand this technology is their best life insurance policy, so to speak.

Indeed, only the simple-minded could have failed to take away lessons with regards to the West’s top hits list. A brief glance at the candidates designated for US-led regime change – Afghanistan, Iraq, Libya, Ukraine, Yugoslavia and Syria as the most obvious – demonstrated an obvious fact: only unarmed countries need to worry about foreign actors determining their ‘democratic’ future.

In marked contrast to those weaker countries that ‘suffer what they must’, members of the nuclear club (US, Russia, UK, France, China, India, Pakistan and North Korea, while it is generally recognized that Israel possesses nuclear weapons although it does not officially acknowledge them) can rest easy in the belief that they are safe from outside attack.

Lately, however, that self-confidence has been greatly shaken by a spate of dramatic events that have given the entire world pause. The most recent wake-up call came this month with a series of aerial dogfights between Pakistan and India – two countries that possess over 100 nuclear warheads apiece. The incident demonstrated exactly how fast things can spiral out of control, especially when third-party actors i.e. terrorists are involved in the equation.

On February 14, the Pakistan-based terrorist group Jaish-e-Mohammed carried out a suicide attack on an Indian military convoy in the Pulwama District that killed over 40 soldiers. Less than two weeks later, New Delhi – accusing Islamabad of going soft on terrorism (sound familiar?) – retaliated by hitting a “terrorist camp” in a Pakistan-controlled part of Kashmir. Tensions mounted the following day as the Pakistani military carried out airstrikes along the Line of Control (LoC), shooting down two Indian aircraft that crossed into its territory and capturing one pilot, who has since been released.

It is impossible to read such reports without recalling that both Pakistan and India possess nuclear weapons. This places the enemy combatants in a curious position in that they must practice extreme restraint so as to avoid a ‘worse-case scenario’, and we all know what that is. Whether or not the two regional rivals can continue to keep cool heads remains to be seen.

Another recent incident involving nuclear powers came as a tragic accident, although no less disconcerting. In September, four Israeli F-16 fighter jets launched a reckless attack on Latakia, Syria that resulted in the downing of a Russian military aircraft, which was accidentally hit by Syrian ground fire. The incident resulted in the death of 15 Russian crew members, as well as heightened global tensions.

The Russian Ministry of Defense accused Israel of deliberately using the Russian aircraft to attract fire in that the Israeli aircraft failed to either change their approach to the intended targets or give Moscow enough time to move the Il-20 to safety.

Although tensions eventually calmed down between Moscow and Tel Aviv, the incident provided a grim reminder that the world is becoming chaotic to the point where accidents between nuclear powers are increasingly likely.

By far, the most disturbing development on the global stage, however, is the spectacle of Washington unilaterally withdrawing from arms control treaties – specifically the Anti-Ballistic Missile Treaty (ABM) and the Intermediate-Range Nuclear Forces Treaty (INF). Needless to say, these moves will rekindle the global arms race – a positive development for defense contractors, no doubt, but an unmitigated disaster for everyone else.

Most worrisome is that the US is trashing these landmark treaties at the very same time it has built a missile defense system in Eastern Europe, while actively building up its military footprint smack on Russia’s border. Moscow, naturally, has responded in kind, with Vladimir Putin having recently unveiled an array of weapon systems that will make US-led NATO think twice about making any aggressive moves against Russia.

Judging by such American antics, one almost gets the impression that it believes a nuclear war is somehow a winnable venture. And there are grounds to believe that is the case. According to a 2017 report, for example, a panel of Pentagon officials have called on the president to consider a “tailored nuclear option for limited use.”

As described in the National Interest, using low-yield nuclear weapons against an adversary’s conventional forces will “demonstrate that you mean serious business and might be crazy enough to launch an all out nuclear attack.”

Judging by what transpired in 1945 against the Japanese, is there any reason to doubt that many people could believe that America is “crazy enough” to do the unthinkable for a second time?

With such deranged ideas floating around, it’s no wonder that the Bulletin of the Atomic Scientists, a non-profit group of academics devoted to the study of security issues, said the world is now perched at “two minutes before midnight” with regards to a nuclear cataclysm due to ongoing events that place the world in “extraordinary danger.”

To paraphrase the 1964 black political comedy, Dr. Strangelove, maybe we should all just stop worrying and love the bomb?

Robert Bridge is an American writer and journalist. Former Editor-in-Chief of The Moscow News, he is author of the book, ‘Midnight in the American Empire,’ released in 2013.

With government formation out of his hands, Netanyahu still a threat

Controversy between Kerry and Zarif appear to diminish – analysis