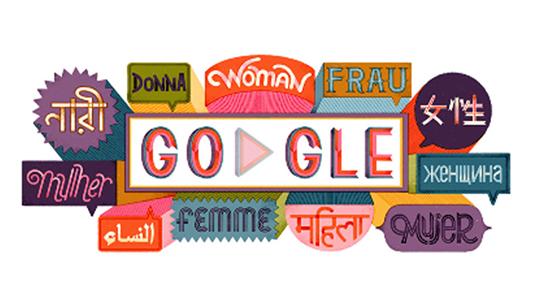 Sputnik – International Women’s Day has a history stretching back more than a century; it dates its founding to the commemoration of a 1909 strike launched by New York City garment workers.

Google joined in the worldwide celebrations of International Women’s Day with its trademark Doodle, changing the company logo to a banner featuring the word “woman” in 11 languages.

The company said in its corporate blog that the design of the banner and quotes were created by an international team of female guest artists as homage to the theme of “women empowering women”.

“The process of choosing the thirteen quotes was extremely difficult, but we aimed to include a diverse representation of voices on a day which celebrates the past, present, and future community of diverse women around the world.”

It appeared to resonate with the public, with commenters calling the slideshow “lovely” and “cutie”.

International Women’s Day is commemorated on 8 March to honour the women of the world and celebrate their achievements. This holiday originated as “Women’s Day” in New York City in 1909; it was organised by the Socialist Party of America to commemorate a garment workers’ strike in New York for higher wages and better working conditions, which had been held a year earlier.

This holiday inspired women from across the world, and in 1910, German Marxist thinker Clara Zetkin called for the adoption of Women’s Day as a worldwide holiday at the International Socialist Women’s Conference.

The following year, on 19 March 1911, over 1 million people in Europe observed International Women’s Day for the first time.

Russian women have also played their part in establishing this tradition: on 8 March, 1917, tens of thousands of women took to the streets of St. Petersburg (then Petrograd) to protest against shortages of bread. The riots were joined by men, swiftly went out of control and eventually led to the downfall of the monarchy.

It was several decades later that the Women’s Day officially went international. The UN began marking the holiday in the International Women’s Year, 1975. Two years later, the UN General Assembly proclaimed 8 March as the United Nations Day for Women’s Rights and International Peace.