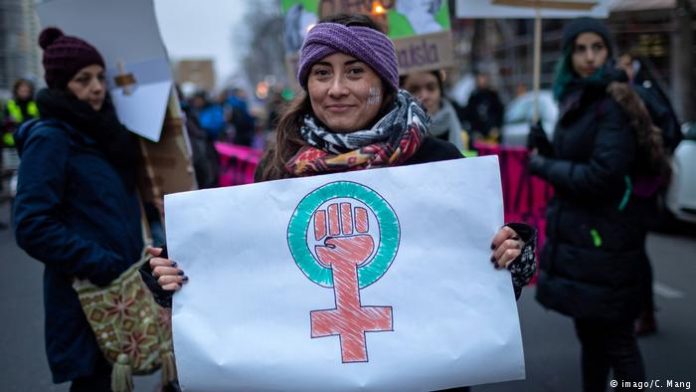 International Women’s Day is celebrated worldwide on March 8. In Berlin, it’s finally an official holiday — but across Germany the day and its meaning are falling flat. That is simply deplorable, says Anja Brockmann.

And yet, the day is missing a certain something: a concept, an idea, a movement. If you ask around about March 8, the replies will be divided between sharp criticism and indifferent shrugs.

For some, Women’s Day is a socialist relic; a reminder of the time when the country was divided and the women in East Germany as well as in the entire Eastern bloc were fobbed off with red carnations and beautiful turns of phrase. Others find that women in Germany have nothing to celebrate as long as they continue to earn less than men and carry the burden of family work. And then there are more than a few who think this whole fuss over women’s rights should be over with already — after all, things can’t be that bad for women if a woman has led the country for 13 years, right?

How far have women come in Germany?

Anything for a day off?

The degree to which Germans are hemming and hawing on Women’s Day is particularly evident in the nation’s capital, Berlin.

Here — and only here, in this one city-state — March 8 is now, for the first time, an official holiday.

It was to be expected that business leaders and economists would complain about the cost of losing a workday, and churches, for example, would likely have preferred adding another religious holiday instead.

But even Berlin Mayor Michael Müller, who was a strong voice for making it official to begin with, until recently didn’t even know what he would be doing to mark the new holiday in his own city. Which just goes to show: It’s all well and good that it’s now a holiday, but it was probably less about the cause of women than about granting workers a day off and currying favor with Berlin voters.

So what if, on this Women’s Day, every woman and every man were to spend just five minutes learning more about the discrimination and deep-seated sexism women face in their everyday lives? And yes, even here in Germany this is necessary.

While women in many other countries risk their lives if they appear unveiled in public, if they work as a journalist or if they send their daughters to school, the problems women face in this country may seem trivial. But even here in supposedly progressive Germany, the claim of equality guaranteed in the constitution and current social reality are still far apart.

Sexism in every avenue of life

Consider this: There is a German volleyball club whose sponsor thinks it’s perfectly fine to print “prachtregion.de” (loosely translated: “slap here.com”) on female athletes’ short shorts. There is a major German online fashion retailer that caters to female clientele across Europe, but just decided to institute for the next few years a women’s quota on its board — of exactly 0 percent. Then there is that male employee who denigrates his female boss as only having gotten the job through being a woman — despite her beating him through the application process. There are the supposedly reputable magazines that illustrate cover stories for seasonal colds and back problems with naked women. And last but certainly not least is the world of social media, in which men can indulge their hatred of women largely unpunished and, for the most petty or inane reasons, wish rape and death upon female users.

If all this is too depressing, then use International Women’s Day to remember the women in Germany and around the world who — over a century ago and at great risk to their lives and livelihoods — took to the streets to demand their rights be respected. Against countless obstacles, they won women’s suffrage and established the foundations of the equal rights movement. These women made the world a fairer and more democratic place — and thus a better place for us all, regardless of sex or gender. And that alone is reason to celebrate!