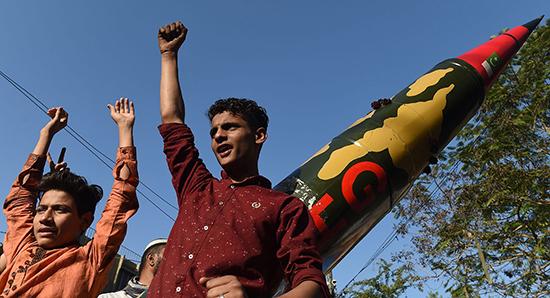 Summary:  Hostilities between India and Pakistan have broken out many times before. But the latest aerial skirmish has upped the ante for any future clashes over the disputed border territories, with perilous consequences.

What is new or different about the current tensions?

India and Pakistan have fought four wars, of which three—in 1947–1948, 1965, and 1999—have centered on the territorial dispute over Jammu and Kashmir. The other conflict, in 1971, was triggered by the secessionist struggle in Bangladesh.

The current crisis was sparked by the largest-ever terrorist attack on Indian security forces in Kashmir. On February 14, 2019, the Pakistan-based outfit Jaish-e-Mohammed (JeM) killed over forty Indian paramilitary personnel in Pulwama. The Indian government responded with an air strike on a JeM camp in Balakot, in Pakistan’s Khyber Pakhtunkhwa Province. The following day, the Pakistani government hit back with an air strike, resulting in aerial combat that led to the downing of an Indian aircraft and the capture of its pilot, Wing Commander Abhinandan Varthaman. India has claimed that its air force shot down a Pakistani F-16 as well. On March 1, the Pakistani government returned the pilot to India as a “gesture of peace,” which appears to have calmed the situation for now.

India’s use of air power after the JeM attack constitutes a qualitatively different response from its actions in the past. With Pakistan responding in kind, a new and higher threshold for limited military action has been established.

How did the two countries handle previous conflicts after militant attacks?

This is not the first time that terrorism has sparked an India-Pakistan crisis. In December 2001, India sent armed forces to the border after the Pakistan-based groups JeM and Lashkar-e-Taiba (LeT) attacked the Indian Parliament. The ensuing crisis lasted for ten months. In November 2008, major terrorist attacks in Mumbai by LeT brought the two nations to the brink of war. On both occasions, however, India decided not to carry out military action and instead focused on catalyzing international pressure on Pakistan to end its support for terrorism.

Srinath Raghavan is a senior fellow at Carnegie India. His primary research focus is on the contemporary and historical aspects of India’s foreign and security policies.

Following the 2016 attack on Indian forces in Uri in Jammu and Kashmir, India carried out limited military operations across the Line of Control (LoC), which divides the state, on terrorist infrastructure, which were billed as “surgical strikes.” Although India had carried out strikes in the past, these were stronger, more coordinated raids.

What is at the core of the bilateral conflict over Jammu and Kashmir?

The crisis in Jammu and Kashmir is a classic territorial conflict with a long and bitter history. At the time of Partition, the ruler of Jammu and Kashmir, Maharaja Hari Singh, was undecided about whether to join India or Pakistan. But his hand was forced when Pakistani forces invaded in October 1947. Hari Singh formally joined the Union of India and requested Indian military assistance. By the time the ceasefire was announced in January 1949, the Pakistani army held a portion of Jammu and Kashmir’s territory, while India controlled the rest—including the crucial Kashmir Valley.

Since then, both sides’ aims have stayed reasonably consistent. India formally claims all of Jammu and Kashmir as its territory but, in practice, has been willing at various points to freeze the status quo along the LoC. Meanwhile, Pakistan has challenged India’s control over large parts of the state, especially the Kashmir Valley, with conventional forces (in three wars) and by supporting insurgency and terrorism in Kashmir and other parts of India.

With India’s general election just weeks away, what are the political consequences of the conflict?

Most research suggests that foreign policy and security issues do not regularly feature prominently in electoral politics. But there has been at least one instance in the past where the incumbent has reaped the dividend of a major military victory. In 1972, the Congress Party under Indira Gandhi swept state elections across India, on the heels of Pakistan’s humiliating defeat in the 1971 war.

Yet a victory on the battlefield doesn’t guarantee a victory at the polls. In 1999, elections were held soon after the Kargil War with Pakistan. Although the incumbent Bharatiya Janata Party (BJP) came back to power in a coalition, the war did not give it much of an electoral boost.

This time around, BJP Prime Minister Narendra Modi is determined to use the current crisis and India’s military response to his party’s electoral advantage. He has positioned himself a muscular nationalist who is unafraid of hitting India’s adversaries militarily. Whether or not the latest crisis benefits him politically depends on his ability to persuade the electorate that terrorism is an important issue and that his approach to tackling it is the best option. Urban Indian voters may buy more readily into this. But Modi’s main electoral challenge is in rural India, where agrarian distress and economic challenges threaten to dent the BJP’s share of votes. Emphasizing this issue may also allow Modi to paint the coalition of opposition parties as incapable of providing tough, decisive leadership on national security.

How would you evaluate the United States’ approach to the crisis?

The United States’ response was certainly less voluble and visible than in the past. After the Pulwama attack, U.S. National Security Adviser John Bolton spoke to his Indian counterpart affirming U.S. support for India’s struggle against terrorism. Then, after the Indian air strike, U.S. Secretary of State Mike Pompeo urged his Pakistani counterpart to exercise restraint and avoid further escalation. In the aftermath of Pakistan’s retaliation, the U.S. administration appears to have pressured Pakistan to release the captured Indian pilot while simultaneously asking New Delhi not to launch any further military strikes. Just a few hours before Pakistan announced the pilot’s release, U.S. President Donald Trump claimed that his administration was engaged in defusing the situation.

Still, in the absence of further information about the administration’s efforts and in comparison with previous crises, it appears that U.S. diplomacy was less engaged and more tentative. This may be due to important regional appointments lying unfilled in this administration, as well as the deterioration in U.S.-Pakistan relations over the past few years.

How should the next Indian government—irrespective of its affiliation—try to change the entrenched dynamic between the two countries?

A significant change in the bilateral India-Pakistan relationship can only occur if Pakistan moves decisively against the terrorist organizations operating out if its territory. If terror attacks on India persist, it may be difficult for any Indian government to exercise restraint, as in the past. Now that air strikes have been established as an acceptable use of force, it may become politically difficult for any Indian government to refrain from using them or even to resist opting for deadlier strikes.

The Pulwama suicide bomber was an Indian national of Kashmiri origin. Is the radicalization of Indian Kashmiris a new threat?

This is not a new phenomenon. The radicalization of disaffected young Kashmiris in the late 1980s set off the insurgency in Jammu and Kashmir. Pakistan took advantage of this development by allowing terrorist outfits under its patronage to take the lead.

Over the past couple of years, there has been another wave of radicalization among Kashmiri youth, especially in the southern part of the Kashmir Valley. Once again, Pakistan-based organizations have been able to capitalize on it. The attacks, and the techniques used, have certainly intensified. The use of suicide bombing is new to the region and suggests a dangerous escalation.

The Indian Air Force claims that Pakistan used F-16s to attack India, which could violate U.S. sale conditions. If this turns out to be true, do you expect repercussions?

The Trump administration has announced that it will look into this issue. Even if Pakistan did use the F-16s, a lot depends on how the United States interprets Pakistani actions. For instance, U.S. military equipment sold to Pakistan under the 1954 mutual defense treaty was not meant be used against India. But when Pakistan used that equipment in the 1965 war, it did not incur any special penalty. Therefore, U.S. action will likely depend on the current state of its overall relationship with Pakistan.