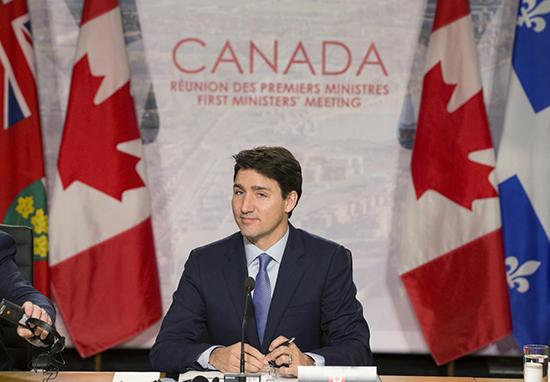 Leyland Cecco in Toronto –  The Guardian

Justin Trudeau has expressed regret for his handling of a political scandal that has cost him two cabinet ministers and a close adviser – but stopped short of apologising, insisting no laws had been broken and that neither he nor his staff had taken any unethical actions.

“This has been a tough few weeks,” the Canadian prime minister said on Thursday. “Canadians expect and deserve to have faith in their institutions and the people who act within them … I have taken – and will continue to take – many lessons from these recent days and few weeks.”

Trudeau and his close aides are accused of improperly pressuring the country’s former attorney general Jody Wilson-Raybould to abandon the prosecution of the engineering company SNC-Lavalin, which is alleged to have bribed the Libyan government to secure lucrative construction contracts. He said: “There are conversations that were experienced differently. I regret that.”

The firm, which employs 9,000 people in Canada, is based in the province of Québec, where Trudeau’s Liberals need to pick up seats to win a federal election set for October. The scandal has cast a shadow over Trudeau’s domestic image as someone who is committed to transparent government.

His conciliatory remarks in front of reporters on Thursday were an attempt to shift public attention away from the scandal.

“He’s trying to strike a kind of tone that is reasonable, acknowledging that this could been handled better,” said Lori Turnbull, a professor of political science at Dalhousie University. “[He’s saying] essentially this is a communications issue. This is a political competence issue at worse, but this is not a corruption issue and nobody pushed anybody around.”

But the prime minister’s statement did little to placate political rivals.

“What we heard from Justin Trudeau was an attempt to justify and normalise corruption. It’s clearer than ever that, inside his government, political interference and contempt for the rule of law are a matter of course,” tweeted the Conservative leader, Andrew Scheer. “This is a PM who has lost the moral authority to govern.”

Jagmeet Singh, leader of the leftwing New Democratic party, repeated calls for a full public inquiry into the issue.

Trudeau said he had made mistakes and acknowledged an “erosion of trust” between his office and Wilson-Raybould, who was removed from her post as attorney general in January and resigned from the cabinet in mid-February.

He denied that his involvement in the case was for partisan or political reasons – but admitted he asked Wilson-Raybould to “revisit her decision” after she told the prime minister’s office it was her intention to proceed with prosecution of the company.

His comments also marked the first time the prime minister had directly spoken about the allegations, following the testimony of Wilson-Raybould and the surprise resignation of the Treasury Board president, Jane Philpott, who said she no longer had confidence in the government.

Trudeau indicated the two were likely to remain part of the Liberal caucus, despite their public repudiation of the prime minister’s handling of the scandal.

Trudeau, typically eager to speak with reporters, cancelled media availability at two events, instead returning to Ottawa for private meetings on how to navigate the troubles facing his government.

Gerald Butts, the former principal secretary to the prime minister, testified in front of the parliamentary justice committee on Wednesday and rejected the idea that anyone within Trudeau’s office pressured the attorney general – suggesting he and Wilson-Raybould had divergent interpretations of the same events. Butts, a close friend of Trudeau, resigned from his post shortly after Wilson-Raybould exited cabinet.

On Thursday, the prime minister confirmed that SNC-Lavalin’s presence in Québec would be in jeopardy if the government secured a conviction, which would bar it from bidding for federal contracts for a decade.

While the government is eager to move forward from the crisis, Wilson-Raybould has expressed interest in returning to the justice committee to further testify – a move the Liberals on the committee have so far blocked.

In a statement to media on Wednesday, Wilson-Raybould said her testimony “was not a complete account but only a detailed summary” and said she looked forward to giving a fuller picture of the events that led to the current political crisis.