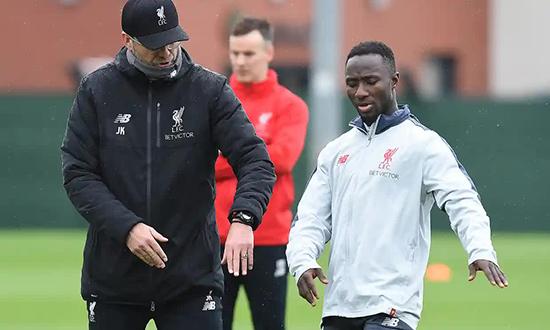 Jürgen Klopp makes a point to Naby Keita, who has been used sparingly in recent weeks. Photograph: John Powell/Liverpool FC via Getty Images

Jürgen Klopp said Liverpool would resemble a “little weak flower” should they change the style that has put them in title contention and Xherdan Shaqiri’s peripheral role is not because of caution on his part.

The Liverpool manager took exception to criticism of his tactics and substitutions last weekend at Everton, where his side slipped behind Manchester City for the first time since 7 December having played an equal number of games. Klopp revisited the issue in the buildup to Burnley’s visit to Anfield on Sunday, insisting he has not curbed Liverpool’s attacking nature in recent away matches and it would be a sign of weakness to do so with only nine games left.

“We do go for it but that doesn’t mean we throw 11 players in their box, hope we score and meet them again at the halfway line,” said Klopp. “That is not how it works. That is why I was a bit disappointed in the last press conference because we don’t play PlayStation and you all know that. It is a sign of being desperate – ‘Let’s try that way, oh that doesn’t work, let’s try this way.’ The way we did it brought us where we are and if someone thinks we should now be 10 points ahead of City I can’t help this person.

“We are trying for the first time [for the title] and for the first time we are not in a bad position. Let’s do what we did that brought us here plus more intensity if possible, with a positive atmosphere around us, and not be this little weak flower. If there is a chance for us with winning all our games, getting as many points as possible, then we will be there. The target is to win the game, not to go nuts in the game.”

Klopp’s sparing use of Shaqiri and, to a lesser extent, Naby Keïta in recent weeks has prompted accusations of not taking sufficient risks to win precious Premier League points. Shaqiri had a major influence on Liverpool’s 100% win rate in December but has played only 210 minutes in the league in 2019. He was an unused substitute in the goalless draw at Goodison Park.

The Liverpool manager explained: “Shaq had a little injury and was out. There was something with his back and he needed a little time. I remember the moment when he got the injury – he won a heading challenge near the sideline. His body wasn’t used to that! It affected him but that’s all. With the line up we had and system wise, it wasn’t difficult but we have to change a little bit if Shaq is playing. For the last few games we didn’t do that. He’s fully fit now.”

Klopp claimed Keïta was one of the first names on his team-sheet following the 3-0 win over Bournemouth last month but the midfielder has played only 82 minutes in four matches since. “We have to think about a lot of things before a game,” the manager said. “We played quite a few teams with really good set pieces and we needed to make sure we had the right line-up and set-up for that as well. Naby is in a good moment and has trained well. That’s it.”

Alex Oxlade-Chamberlain was substituted 41 minutes into his comeback for the under-23s as a precaution against a tight hamstring. The England international, sidelined since last April by a serious knee injury, was scheduled to play only 45 minutes against Derby on Friday but was withdrawn earlier after feeling his hamstring. Liverpool say the substitution was merely a precautionary measure.