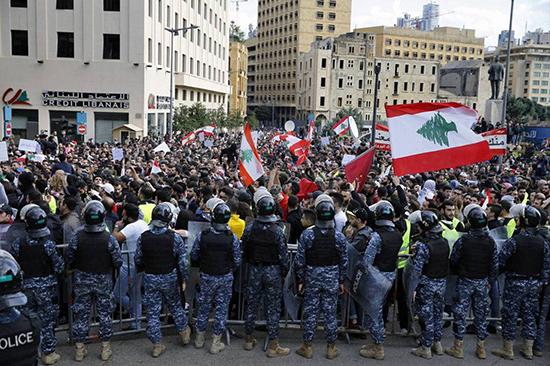 For Hezbollah and the FPM, combating corruption offers an attractive theme to distract attention from their own abuses.

BEIRUT: It is no surprise that the Free Patriotic Movement (FPM) joined Hezbollah in accusing former Prime Minister Fouad Siniora of corruption. This is primarily a result of the “presidential deal.”

The fight against corruption is not a political issue. It is a law and order issue. Investigating a matter involving corrupt practices should be initiated not by the politicians, but by the prosecutors. This is how it is done in countries that respect the separation of powers and adhere to the rule of law. But in Lebanon, the fashion is to place political expediency ahead of the law.

Hezbollah barricades itself behind the fight against Israel in order to commit illegal activities. The list of accusations against the party is a long one. But if it truly wants to champion the fight against corruption, and show respect for the rule of law, it would start by handing over those accused of taking part in the assassination of Rafic Hariri. It would not defy the entire country and boldly declare “not in 100 years, 200 years or 300 years.”

Similarly, the list of accusations of corruption against the FPM and its leadership is also a long one. The fact that the country has been enduring a poor supply of electricity for the past 10 years is corruption. The party, which has been in charge of the ministry of power for that period, bears direct responsibility. If its call to combat corruption is serious, it could start by explaining why an offer by the Kuwaiti Fund to rehabilitate Lebanon’s electricity system was rejected in favor of a dubious deal to rent Turkish power-generating vessels?

Hezbollah and the FPM would not have dared to make their illegitimate claims against the former prime minister had they not sensed a weakness in the camp to which Siniora belongs, mainly from Prime Minister Saad Hariri.

Hariri has built his political career on embracing the role of “the mother of the child.” The myth is based on the biblical story of King Solomon and two women who fought over the motherhood of a child. The gist of the story rests on sacrifice. The true mother sacrificed her child to the false mother rather than see him cut in half, as proposed by the wise king. As a result, King Solomon knew who the true mother was and gave her the child.

But what Hariri failed to recognize is that in Lebanese politics sacrifice does not always produce a happy ending.

Since 2005, Hariri made many sacrifices, to the extent that he depleted the March 14 movement of its purpose. The false accusation against Siniora is a fallout of the sacrifices that Hariri made in the “presidential deal” with Hezbollah and the FPM in 2016. The immediate purpose of the deal was to end the two-year vacuum in the presidency and make Hariri prime minister. More important was the ultimate aim of the deal. It was to clip Hariri’s wings and dismantle the March 14 movement.

Driven by the will to get the country moving by electing a president, Hariri ignored the ultimate consequences of the deal.

For Hezbollah and the FPM, combating corruption offers an attractive theme to camouflage such consequences, and distract attention from their own abuses.