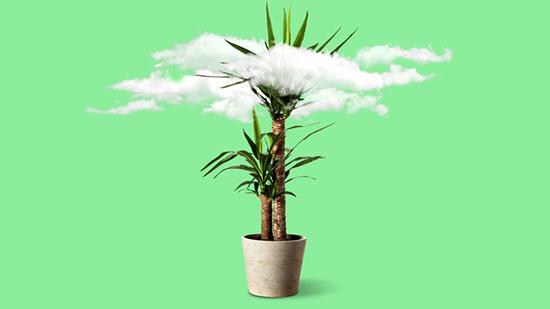 The science is clear: Indoor vegetation doesn’t significantly remove pollutants from the air.

When vine-curious Brooklynites walk into Tula Plants and Design—a small houseplant shop in Greenpoint with a vibrant Instagram presence and a profusion of leaves on every available horizontal surface—the employees know what questions to expect.

There are two, according to Ariel Ries, an employee at the store. The first is, “Will this plant kill my pet?” The second is, “What kind of plants are best for cleaning the air?”

Of all the 1970s trends that have enjoyed a resurgence in recent years—astrology, Fleetwood Mac, and special-counsel investigations among them—few have shown the explosive growth of houseplants and indoor gardening. “More American households are gardening than ever before (77 percent),” bragged a recent press release from the National Gardening Survey, “and increasingly the gardener is a young man.”

As a young man, I can vouch: I am increasingly the gardener. (I own seven plants.) Of the 6 million Americans who took up gardening in 2016, 5 million were Millennials like me, according to the National Gardening Survey, an annual poll conducted by a nonprofit advocacy group. Gardening is now a $47 billion industry in the United States, with the average gardener household spending a record $503 on plants and materials annually. (I have spent $63.)

Houseplants have much to recommend them. They’re fun to care for, they look good on Instagram, and they express environmental angst through interior design. But one of houseplants’ most commonly repeated virtues holds that they’re not only living tchotchkes, but also little HVAC machines: Houseplants, allegedly, filter the air. The Sill, an online plant store that communicates its Millennial bona fides through chunky serifs and large splotches of white space, lists plant species by the airborne toxins they are best at removing. (Philodendrons filter formaldehyde.) Yet interest in this particular plant benefit is not limited to the self-care set. The same question has landed listicles in the patrician This Old House, the nerdy Lifehacker, and adoomsday-prepper blog.

For several years, research really did suggest that houseplants might cleanse the air of certain pollutants. But now most scientists say that’s not right.

“It’s such an alluring and enticing idea,” Elliot Gall, a Portland State University professor, told me. “But the scientific literature shows that indoor houseplants—as would be typically implemented in a person’s home—do very little to clean the air.”

“My view is even harsher than that,” Michael Waring, an engineering professor at Drexel University, told me. “I do not think that houseplants clean the air.”

“A resounding ‘no,’” agreed Richard Corsi, a longtime air-pollution researcher, in an email. Houseplants do not clean the air “any more than an old pair of socks or baseball cap that I would hang on the wall.”

Why the confusion? Big Succulent isn’t lying to you, though at this point the houseplant industry is cherry-picking data. But for plants to actually improve the air, even in a compact apartment, you’d need a concentration of houseplants that only the most dedicated plant lovers can actually achieve.

In the late 1980s, the NASA scientist Bill Wolverton investigated whether common houseplants could remove a certain type of air pollutant, called “volatile organic compounds,” or VOCs, from the air. VOCs are regularly released by common household products such as drywall, house paints, nail polish, shampoo, and almost anything with a scent. Their harmful effects can range from an itchy throat to nasopharyngeal cancer.

Unlike other types of air pollution, such as soot or particulate matter, VOCs can’t be filtered out of the air with a fine-grade filter. This means that they can build up in hermetically sealed environments … such as laboratories or spacecraft. The problem for NASA was obvious. So Wolverton, a former military scientist who began his career studying whether plants could break down Agent Orange, now examined whether houseplants could absorb VOCs.

His 1989 report announced a cheerful answer. Plants were “a promising, economical solution to indoor air pollution,” it declared. “If man is to move into closed environments, on Earth or in space, he must take along nature’s life support system.” The report—jointly funded by NASA and the Associated Landscape Contractors of America, a trade group—was picked up by the media. The idea gained even more currency in 1996, when Wolverton published How to Grow Fresh Air: 50 Houseplants That Purify Your Home or Office. (Wolverton did not respond to a request for comment.)

That study provides the scientific basis for almost all the plant-and-air-pollution content you see online. “I’ve seen it on so many pop internet sites—‘researchers from NASA’ is the common phrase you see,” Waring, the Drexel professor, said. He told me that there’s nothing especially wrong with Wolverton’s 1989 study. Its results “fall right in line with other stuff that’s been measured in the literature.”

But taking its results at face value significantly overstates the power of plants, he said. Wolverton measured whether houseplants could remove VOCs from an airtight laboratory environment. But a home is not a hermetic chamber. It has open windows and doors, drafts and leaks, and much more clutter.

Recently, Waring and his colleagues reanalyzed all 195 studies that have examined whether houseplants can filter the air. They found that some types of plants can remove higher amounts of VOCs than others. But once you factor in the effects of working in a large room, none of the plants are able to do much.

Waring told me to imagine a small office, 10 feet by 10 feet by eight feet. “You would have to put 1,000 plants in that office to have the same air-cleaning capacity of just changing over the air once per hour, which is the typical air-exchange rate in an office ventilation system,” he said. That’s 10 plants per square foot of floor space. Even if you chose the most effective type of VOC-filtering plant, you would still need one plant per square foot, Waring said.

Or as Waring (who owns 10 to 20 houseplants) recently put it in a presentation for the National Academies of Sciences, Engineering, and Medicine:

But maybe scientists have been researching the wrong pollutant. Several years ago, a team of researchers examined whether houseplants could remove ground-level ozone. Ozone’s effects are often described as “sunburn inside your lungs,” and can cause painful breathing, asthma attacks, and even the chronic lung disease COPD.

More than 107 million Americans live in areas with unhealthy amounts of ozone, according to the Environmental Protection Agency. Unfortunately, houseplants can’t do much about that, either. The researchers found that even the most effective plants barely reduced the level of ozone in indoor spaces. “If ozone levels were 30 parts per billion in your home, then you might reduce them to like 29.7 parts per billion,” said Gall, the Portland State professor and a co-author of the study. (He owns no houseplants. “When I did a postdoc in Singapore, we had two big houseplants we were excited about and loved, but then we had ant problems for the next two years,” he said.)

To start to even marginally lower indoor-air pollution, Gall estimated that you would need at least one houseplant for every 20 square feet of floor space. “And there are downsides to that,” he said. “You wind up having a living system in the space, and that might raise indoor humidity and cause other problems.”

Hilton Carter enjoys having a living system in his space. Carter is a filmmaker and designer whose plant-focused Instagram account has more than 163,000 followers. He told me he keeps about 185 plants in his 950-square-foot apartment in Baltimore, roughly one plant per every five square feet. “You can feel the difference in a space that’s filled with plants as opposed to a space that isn’t,” he said. “Right now, my home feels a bit more humid than it would without those plants in there.”

This humidity, while great in the winter, did somewhat limit his decoration options. “If you want to have furniture in there, it probably wouldn’t be as wise,” he said. But it’s worth it: He loves the feel of a space with plants, even if they don’t purify the air as he thought.

Yet even Carter’s apartment did not meet the strict quota for VOCs. Not even Instagram-famous plant density can cleanse a room. In fact, I found only one place that achieved one plant per square foot: Tula Plants and Design. Ries told me that the 800-square-foot store will regularly have more than 800 plants for days after a delivery. (On the day I called, it had 750.)

And Ries, as it happened, was familiar with the original Wolverton study. The store regularly shows it to customers who ask about the best air-purifying plants, she said, though employees also warn them that the study measured something very specific and was “definitely different than how it would be in our real environment.” Often, patrons walk away with peace lilies. I asked whether the newer science might change Tula’s recommendations.

“I guess I could imagine putting peace lilies all over the place. Then your home would be very full of peace lilies,” Ries said. “But unless you really loved peace lilies and snake plants, it might not be something that brings you joy.” And joy, not marginal air pollution, is the real reason to own a plant. I said that I still loved my new plants, even if they didn’t make my apartment’s air any cleaner.

“Bringing plants in, bringing greenery in—it’s about having something near you that’s alive, that you’re caring for, that brings you joy and happiness,” she said. “And that affects your mood, whether or not it’s giving you more oxygen to breathe or something.”