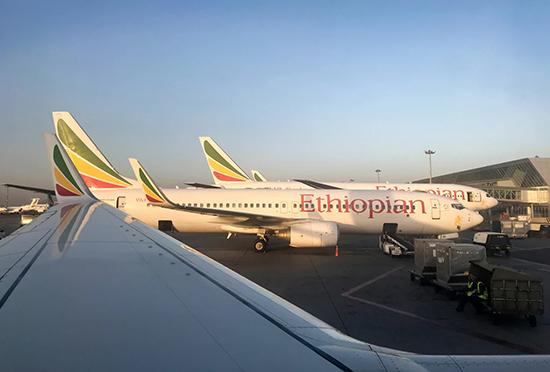 Boeing 737s operated by Ethiopian Airlines at Bole International Airport in Addis Ababa. One of the airline’s Boeing 737 Max jetliners crashed shortly after takeoff from the airport on Sunday, killing all 157 people aboard.CreditBen Curtis/Associated Press

By James Glanz and Zach Wichter – The New York Times

The trouble appeared to begin almost immediately after takeoff. The pilots told air traffic controllers that they were having technical problems. And the plane seemed to repeatedly climb and dive before a final plunge.

Two eerily similar scenes have played out in recent months for Boeing’s brand-new 737 Max jets: on Sunday, when an Ethiopian Airlines flight crashed just after taking off from Addis Ababa, killing 157 people, and in October, when a Lion Air disaster killed 189 people in Indonesia.

The Ethiopian crash occurred just outside the country’s capital, leaving a smoking crater where investigators combed over the grim scene. Much about the cause of the crash remains unknown and will take weeks to investigate, and Boeing and the National Transportation Safety Board are sending teams to the crash site.

[The plane lost contact with air traffic controllers six minutes after takeoff before plunging to earth.]

But the rarity of two planes of the same model going down in such a short time span has urgently caught the attention of pilots, passengers, engineers and industry analysts.

For Boeing, the questions go to the heart of its business, as the 737 class is a workhorse for airlines worldwide, and the single-aisle 737 Max has been the company’s best-selling plane ever. By the end of January, Boeing had delivered over 350 737 Max jets since putting them in service in 2017. They have a list price of around $120 million, the company said, and around 5,000 more are on order.

“There’s a whole lot of questions here and not a lot of answers,” said John Cox, the former executive air safety chairman of the Air Line Pilots Association in the United States and now the chief executive of Safety Operating Systems, a consulting firm.

Some airline and national officials are not waiting for answers. China on Monday morning ordered the grounding of 737 Max planes, and Cayman Airways said it was grounding its two new 737 Max jets.

The business of building and selling jets is brutally competitive, and the 737 Max was Boeing’s answer to an update that Airbus, the giant European aircraft manufacturer, unveiled for its popular A320 jet that made it more fuel-efficient. The two companies are global leaders in the field, and they have jockeyed for dominance for years. About 10,000 total planes from Boeing’s 737 family are in service, compared with over 8,000 in Airbus’s A320 family. Many airlines rely on these kinds of planes as linchpins of their fleets. They are designed to efficiently serve short- and medium-haul routes (like New York to Miami or Los Angeles), and carry about 200 passengers.

Boeing’s response to its rival’s move was a more efficient engine, but the Max engine was bigger than the earlier versions. To address this engineering challenge, Boeing updated the software for the flight control system. After the Lion Air crash, some American aviation authorities said that the change had not been adequately explained to pilots.

But in light of the Indonesian disaster, pilots have since been informed by Boeing and regulatory agencies of the Max’s new system, and airlines have provided training classes on it. Whether Ethiopian Airlines, which, unlike Lion Air, has a strong safety reputation, carried out that training was not immediately known.

Boeing installed the system on the new 737s as part of the “control law” — commands issued by the plane’s flight-control computer that bypass the pilots. On the Lion Air flight, the swings up and down may have come about as pilots repeatedly tried to keep that system from pushing the nose of the aircraft down and putting it into a fatal dive. Whatever happened, the pilots lost their battle after about 12 minutes of flight.

While a malfunction of that system is a possibility in the Ethiopian flight, which lasted about six minutes and included a shorter series of swings, early information is still too sketchy to draw conclusions. And what is known so far does not rule out pilot error or the malfunction of a completely separate system.

Robert Stengel, an expert on flight control systems and a professor of engineering and applied science at Princeton University, said it was not clear whether the rocking trajectory of the Ethiopian jet was caused by a malfunctioning control system or pilots trying to fly the plane manually while distracted by some other, as yet unknown, emergency.

While cautioning that no conclusions could be reached without more information, Professor Stengel said that broad similarities in the two crashes could not help but affect the flying public.

The short, deadly flight in Ethiopia may call for immediate action while investigators determine if there is a common thread, said Jim Hall, a former chairman of the National Transportation Safety Board.

“This matter has got to be addressed,” Mr. Hall said. “The possibility of grounding the aircraft would be one of many options I would assume the regulators and the investigators are looking at.”

Analysts agree that Wall Street is not going to be kind to Boeing stock on Monday. And whatever hit its shares take will weigh heavily on the Dow Jones industrial average, which in recent years has been lifted by Boeing’s success.

Shares of Boeing have tripled since the presidential election in 2016, making it the highest-priced stock in the Dow. From Nov. 8, 2016, through Friday, the Dow added more than 7,000 points, and Boeing’s rise accounted for nearly 30 percent of its gain.

Richard Aboulafia, an aviation analyst at the Teal Group, cautioned against reading too much into the immediate reaction in Boeing’s shares. “I’ve learned from bitter experience not to look at the stock prices in the aftermath of a crash,” he said. “It’s just all over the place.” Mr. Aboulafia also predicted that any pullback was likely to be a short dip, given the company’s recent strength.

Mr. Aboulafia said, “If they have to implement a very rapid series of any kind of modification or training procedures, A) they have the resources and B) relative to their revenue base, it’s not going to be a disaster.”

Boeing has said that it is evaluating changes to the new software, and a person briefed on the matter said an upgrade was in the works.

Just six years ago, Boeing had another high-profile headache with a new plane, when its 787s were grounded after a series of battery problems.

Scott Hamilton, an aviation industry consultant with the Leeham Company, said Boeing’s response to the issues with the 787 — when there were 50 in service — could preview its response to the 737 Max accidents.

Still, “it would be a bigger problem,” Mr. Hamilton said, “because at this point you have something close to 300 737 Maxes already in service.”

Boeing, which makes commercial and military airplanes as well as other aerospace components, is one of the biggest exporters in the United States. The company’s main offices are in Chicago, and most of its production takes place in factories in Washington State and South Carolina.

According to Mr. Hamilton, the factory in Renton, Wash., primarily produces the 737 Max planes. Boeing also opened a so-called completion center in China in December. According to The Seattle Times, about a third of new 737s are delivered to Chinese airlines, and the new facility will allow finishing work like exterior painting and the installation of interior fixtures to happen more quickly and efficiently for those customers.

Flight-tracking websites showed that Chinese airlines were starting to substitute Boeing 737-800s on Monday morning on routes on which they had previously operated a Boeing 737 Max.

China’s main airlines are among the biggest users so far of the new Boeing jets, having ordered at least 104 of them and taken delivery already of at least 70. By contrast, many other carriers, often in slower-growing markets than China’s, have taken delivery of only a small fraction of their orders for the Boeing 737 Max.

The pilots who fly the 737 Max are keeping a close eye on developments. Dennis Tajer, a spokesman for the American Airlines pilot union and a 737 pilot, said the training and other information had restored pilots’ confidence in Boeing since the Indonesia crash.

Mr. Tajer said it was too soon to say that the Ethiopian crash would change that view. But, he added, “We’re not far off the time when we were being told that new equipment on the Max wasn’t disclosed. We have that memory to work with.”

“It’s too early,” he said, to say what influence the crash will have, “but boy, are we watching.”