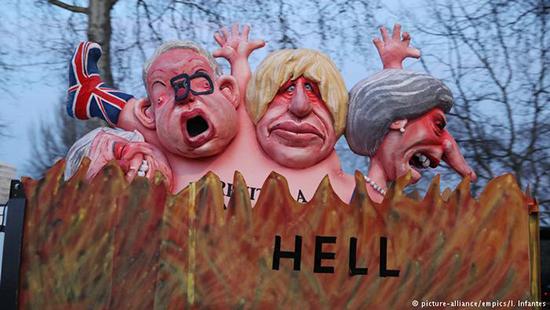 With the clock ticking inexorably closer to the UK’s official departure date from the EU, the week ahead promises to be a nail-biter. DW’s Rob Mudge takes a look at the key Brexit scenarios.

There are just under three weeks left before the United Kingdom is due to officially leave the European Union on March 29. Depending on your point of view, none of the permutations are particularly palatable.

So what can we expect in Parliament this week?

Prime Minister Theresa May wants to bring an amended deal before the House of Commons for a second meaningful vote. May suffered a heavy defeat in the first vote in January with MPs siding 432 to 202 against her plan for a smooth Brexit and the 21-month transition period to negotiate a free trade agreement.

If her revised deal passes, MPs would then get down to the nitty-gritty of the required legislation to implement it.

However, if the Commons rejects the proposal again, the prime minister has promised to table a second motion for debate and a vote on the UK leaving the EU without a deal. In this scenario there would be no transition period and consumers, business and public bodies would need to adapt immediately to post-Brexit changes. The issue of the border between Northern Ireland and the Republic, which is a key bone of contention, would remain unresolved. The border would become an external frontier for the EU with the likelihood of customs and immigration controls.

If that scenario is also voted down, May’s third prong of her pledge would be to introduce a motion to seek a short extension of Article 50’s (the legal and political process of withdrawing from the EU) two-year negotiating period. If the Commons approves this motion, the prime minister would then be expected to ask the European Council for an extension until no later than the end of June 2019. A longer extension would raise questions about the UK’s participation (or not) in the European Parliamentary elections in May, as the new group of MEPs are due to sit in early July.

EU leaders convene for a summit where they may thrash out a last-minute deal or agree to extend Article 50 to avoid a no-deal disruption.

The government could opt to substantially negotiate a new deal which could not be done overnight. One such scenario is the so-called Norway model which would involve the UK becoming a member of the European Free Trade Association and the European Economic Area. Norway is a member of both, along with Liechtenstein and Iceland. As a member of both bodies, the UK would retain full access to the single market, thus allowing barrier-free trade with the EU and single market access for services, which account for around 80 percent of the UK economy.

The elephant in the room. Technically, there are two options. One would be to hold another legally nonbinding and advisory referendum like the one in 2016 where the question would have to be determined. The other is a binding referendum where the result would automatically take effect. In this instance the question on the ballot paper — on a deal or to remain in the EU — is set out in the legislation. But even if it were to pass, the referendum couldn’t happen immediately. Instead there would have to a statutory referendum period before the vote. Experts say the minimum time required to have everything in place for a second vote is around 5 months.

Theresa May could decide she’s had enough and call an early election as a way to end the deadlock. Having said that, she can’t simply call it. As in 2017, she would have to ask MPs to vote for an early election under the Fixed Term Parliaments Act, which determines that elections are only supposed to happen every five years, and it would require a two-thirds majority.

The opposition Labour Party could table such a motion at any time. If a majority of MPs back the motion, it triggers a 14-day countdown. If during that time the government cannot win a confidence vote, an early election is called.

The European Court of Justice has ruled that the UK can legally and unilaterally revoke Article 50 and cancel Brexit. Given the current government’s pro-Brexit stance, it’s unlikely this would happen without a further referendum or a change of government.