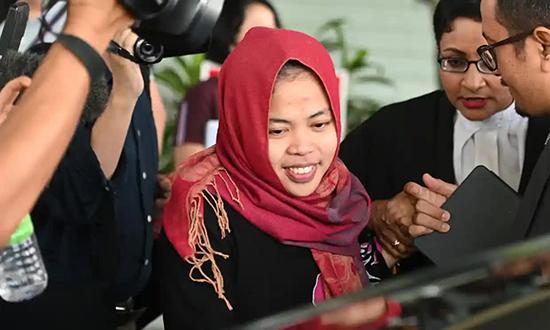 The case against Siti Aisyah, one of two women who were charged with the murder of the estranged brother of Kim Jong-un, has been dropped by a court in Malaysia.

She was released from custody after the decision in Kuala Lumpur on Monday morning.

Siti and Doan Thi Huong were charged with the murder of Kim Jong-nam in Kuala Lumpur airport in February 2017. The women were accused of smearing the toxic nerve agent VX on his face as he waited to board a flight to Macau. He died within 20 minutes.

Both Siti and Doan, from Vietnam, claimed they had unknowingly been tricked into carrying out the murder by North Korean operatives, who told them they were playing a prank for a Japanese comedy show. They both allege they thought they were smearing lotion on Kim Jong-nam’s face.

At Shah Alam high court in Kuala Lumpur on Monday morning, the prosecution applied for a discharge not amounting to an acquittal for Siti, under section 254 of the criminal procedure, which was approved by the judge. The prosecution did not provide a reason why they wanted to drop the charges.

Dressed in a maroon headscarf and black trousers adorned with bright flowers, Siti looked tired and pale as she entered the Indonesian embassy, accompanied by the Indonesian ambassador and other officials.

“I finished my job,” said Siti’s lawyer, Gooi Soon Seng. “She is a free person now, she will be going back to Indonesia.”

Embassy officials confirmed that arrangements were being made for Siti to fly back home tonight. Asked about the first thing she wanted to do on her release, Siti said simply “see my family.”

I am very happy, I did not expect my release. This is my day of freedom.

Indonesia’s government says the release of Siti was the result of its continual high-level lobbying.

Indonesian President Jokowi, who is facing an election next month, met with Malaysian Prime Minister Mahathir last July to address Siti’s case, and then again with Mahathir, Malaysian attorney general Tommy Thomas and the chief of police.

The letter approving the release of Siti was signed personally by the Malaysian attorney general last Friday, 8 March. According to the letter, the decision to drop the charges against Siti came after taking into consideration “the good relations between our respective countries”.

The foreign ministry said in a statement Monday that Siti Aisyah was “deceived and did not realise at all that she was being manipulated by North Korean intelligence.”

The ministry said Malaysia’s attorney general used his authority under Malaysia’s criminal procedure code to not continue the prosecution and that Siti’s plight was raised in “every bilateral Indonesia-Malaysia meeting, both at the president’s level, the vice-president and regular meetings of the minister of foreign affairs and other ministers with their Malaysian partners.”

The discharge order only applies to Siti. Doan’s trial will resume on Thursday.

Speaking to reporters through an interpreter in court, Doan said she felt “terrible” about her own position.

“I do not know what will happen to me now. I am innocent, please pray for me,” she said. Doan’s lawyer, Hisyam Teh Pok Teik, added that she was “traumatised by what happened in court”.

The prosecution had moved to throw the case out in August last year, but the judge ruled that the women should testify. He said he accepted that it could have been a “political assassination” but said he could not rule out that there had been a “well-planned conspiracy” between the two women and the North Korean operatives.

Kim had originally been the favoured child to take over from his father, Kim Jong-il, but became estranged from the family after an incident in 2001, when he was arrested trying to get into Japan on a fake Dominican passport with the Mandarin alias “fat bear”. He later admitted he had been trying to visit Disneyland in Tokyo.

The incident was said to have caused embarrassment to Kim Jong-il, who cut ties with his son and refused to let him back to Pyongyang. Kim Jong-nam instead settled in the Chinese gambling enclave of Macau. He expressed little desire to return to North Korea, and angered his younger brother, who took leadership in 2011, by saying that the world would view Kim Jong-un’s leadership as a “joke”.

However, Kim was reported to have become increasingly fearful and paranoid in the past few years, fearing retribution from his brother. The court case revealed he had been carrying 12 doses of an atropine, an antidote to VX nerve agent, in his bag at the time of his death.

His murder sparked a diplomatic stand-off between North Korea and Malaysia, with the nations briefly banning its other citizens from leaving.