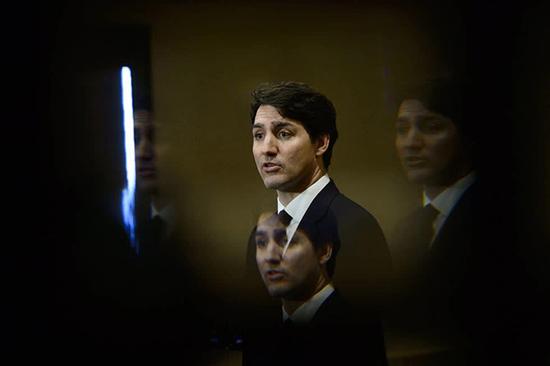 Justin Trudeau rose to power in Canada as a champion of feminism and indigenous rights, quickly earning him golden boy status at home and abroad as a progressive leader.

But a major political scandal that sparked the resignation of two of his ministers ― both women, one indigenous ― has tarnished his image just seven months before national elections.

Pundits say the 47-year-old premier faces a tough battle just to stay in office, with the latest polls showing his Liberals trailing the Conservatives for the first time.

For weeks, Trudeau’s government has been rocked by accusations of meddling in the criminal prosecution of engineering giant SNC-Lavalin, which was charged with corruption over alleged bribes paid to secure contracts in Libya.

His attorney general Jody Wilson-Raybould, who said she experienced “consistent and sustained” political pressure to shield the company from a trial, stepped down.

On Thursday, Trudeau addressed the allegations head-on, telling reporters in Ottawa that he had learned “lessons” from the crisis ― but denying any wrongdoing.

For the opposition, that wasn’t enough. On Friday, they renewed their calls for Trudeau to resign.

“Trudeau is facing a serious crisis of confidence in his leadership,” said Stephanie Chouinard, a politics professor at the Royal Military College of Canada.

“Seeing not one, but two members of his cabinet slamming the door like that, it’s unheard of for many years in Canada and it augurs very badly for him ahead of the October elections.”

The Liberals built their brand around the handsome young Trudeau, a one-time bartender and snowboard instructor with Hollywood good looks and a father who was widely admired when he served as premier.

Trudeau brought rock star energy to the job, and his brand of progressive politics ― he made bold statements on climate action, legalized cannabis and helped refugees make a new life in Canada.

The Liberals’ 2015 victory marked the return of the party, which had governed for most of the last century before being relegated to third-place status in a 2006 ballot. Trudeau was hailed.

Now, his “virtue is being questioned,” Chouinard said.

“He promised to do politics differently and introduce real change, but (in many eyes) has showed himself to be a politician like any other.”

SNC-Lavalin was charged in 2015 with corruption for allegedly bribing officials in Libya between 2001 and 2011 to secure government contracts during the rule of former strongman Moamer Kadhafi.

The Montreal-based firm openly lobbied the government for an out-of-court settlement that would result in a fine and agreeing to compliance measures, saying a conviction would lead to job cuts.

But Wilson-Raybould, Canada’s first indigenous attorney general, refused to ask prosecutors to settle, and the trial is set to proceed.

She later testified to lawmakers that she had received “veiled threats” over her stance ― and Trudeau’s inner circle came under suspicion.

Since the crisis erupted a month ago, Trudeau has seemed “disconnected” and “not in control” of his government, said Eric Montigny, a politics professor at Laval University in Quebec City.

The resignations of two tough, successful women who embodied his values have prompted Canadians to re-examine his bona fides, especially his commitment to women and indigenous people, he said.

Also, apparent contradictions in his policies, such as pushing for carbon emissions cuts while buying an oil pipeline in support of Canada’s energy sector, are getting more attention.

“It strikes at the heart of the Trudeau brand,” Montigny said.

“It also becomes more difficult for the prime minister to tell voters to trust him when two senior ministers say they have lost confidence in him.”

For a hint of how things might play out, many will look to the March 19 federal budget vote.

If Liberals, who hold a majority in parliament, break ranks, it could trigger snap elections.

Marcel Chartrand, a communications professor at the University of Ottawa, is nevertheless optimistic that Trudeau’s party and Canadians in general will forgive his missteps.

“He is young, he learns from his mistakes and I think Canadians will give him the benefit of the doubt,” he said. (AFP)

Turkish Delegation to Visit Egypt in May for ‘Normalisation’ Talks