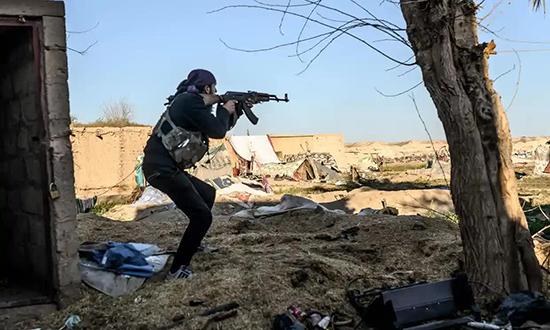 Airstrikes have targeted Islamic State weapons stores as the US-backed Syrian Democratic Forces (SDF) launched an attack against the jihadists’ enclave in Baghuz near the Iraqi border.

An SDF official, Mustafa Bali, said the attack began at 6pm local time and “direct and fierce” clashes were under way.

The assault by the SDF aims to wipe out the last vestige of Isis’s self-declared “caliphate” that once spanned a third of Iraq and Syria.

While the Baghuz enclave represents the last shred of populated land held by the jihadists, the group is still widely seen as a big security threat with remote territory elsewhere and the continued capacity to launch guerrilla attacks.

The SDF, spearheaded by the Kurdish YPG militia, has been poised to advance into the enclave for weeks but has repeatedly held back to allow for the evacuation of civilians, many of them wives and children of Isis fighters.

Bali said no further civilians had emerged from the enclave since Saturday and the SDF had not observed any more civilians in the area, prompting the decision to attack.

“The military operations have started. Our forces are now clashing with the terrorists and the attack started,” he said.

Tens of thousands of people have streamed out of the shrinking territory held by Isis over the last months. Bali said more than 4,000 militants had surrendered to the SDF in the past month.

Earlier on Sunday, a Reuters correspondent saw SDF forces advance into a tented area of Baghuz after Isis fighters withdrew from it. SDF fighters gathered some ammunition and rifles left behind by the jihadists.

In its previous guise as an al-Qaida offshoot in Iraq a decade ago, Isis navigated adversity by going underground, biding its time to rise suddenly again.

Since suffering devastating territorial losses in 2017, Isis has steadily turned again to such tactics. Sleeper cells in Iraq have staged a scatter-gun campaign of kidnappings and killings to undermine the Baghdad government.

The group has also carried out many bombings in northeast Syria, which is controlled by US-backed Kurdish forces, including one that killed four Americans in January. Kurdish and US officials say it remains a menace there.

The fate of the Isis leader, Abu Bakr al-Baghdadi, remains a mystery.