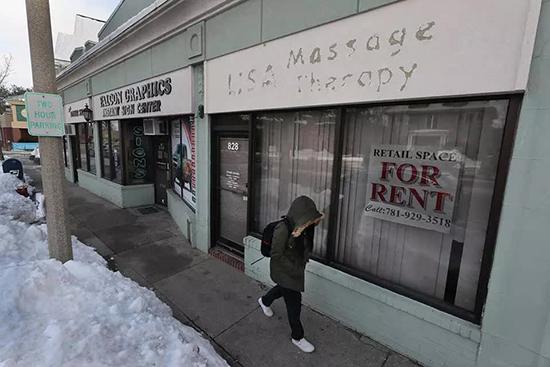 The empty store at 828 Mass. Ave. in Arlington once housed a massage parlor.

NORWELL — The Platinum Body Works Spa was housed in a nondescript blue Cape along a commercial stretch of Route 53. But workers at the neighboring business knew it was no ordinary massage parlor.

The shades were drawn. Clients — always men — would come in through a back door for appointments as brief as 20 minutes. One night, while working at the Marathon Sports store next door, Terri Ladka and Azure Mauche spotted a very young teenage girl leaving the “spa” for a van, they said.

How old could she be, they wondered? Thirteen?

“It made us think this is not something to even joke about or allow to continue happening,” said Ladka, a 50-year-old mother of four from Marshfield. The women went to Norwell police, who hinted the place was already on their radar.

That was three years ago.

It wasn’t until this month that the husband and wife who operated the Norwell spa were arrested and charged with trafficking a person for sexual servitude. The jarring news brought to Norwell’s doorstep a seemingly far-fetched reality that had already touched down in Stoneham, Arlington, Needham, and other Massachusetts communities: that there are women being held as sex slaves in the suburbs in 2019.

The high-profile charge against New England Patriots owner Robert Kraft in February for allegedly soliciting prostitution at a massage parlor in Florida has brought new attention to an issue activists have tried to shine a light on for years. Now, they hope the public will see these spas and massage parlors with fresh eyes.

But authorities have their work cut out for them in cracking down on massage businesses that are a front for prostitution. Massachusetts has 1,882 licensed massage therapy establishments, according to the Division of Professional Licensure. And the number of investigators assigned by the Board of Registration for Massage Therapy to inspect them?

Meanwhile, the “body work” shops that have popped up with mundane regularity in strip malls and office parks across the Commonwealth are exempt from state licensing requirements and are unregulated in most Massachusetts communities.

Police and prosecutors have made concerted efforts to curb sex trafficking since a state law took effect in 2012. The attorney general alone has prosecuted more than 50 people for trafficking at massage parlors, hotels, and brothels. And the federal government took steps to end brazen online advertising for illegal sex by shutting down the website Backpage last year.

But the Internet has at least one other website directing customers to spas that offer sexual services all over Massachusetts, complete with customers’ Yelp-like reviews. And prosecutors say that many seeming mom-and-pop storefronts are part of larger networks that can quickly move around women and money. Shut them down in one location and they pop up in another — or even come back, under new ownership.

In November, a woman was charged with running a large human-trafficking operation for spas in Stoneham, Arlington, Dracut, and Boston. The one in Arlington, located just a few steps from the Whole Foods on Massachusetts Avenue, had previously been cited by health inspectors for lesser violations under different ownership. The one in Stoneham — beside the public library, in a building that houses a children’s dance studio — had seen its previous owner charged with sex trafficking four months earlier.

One of the women arrested in the Florida sting operation that nabbed Kraft was previously charged with sex trafficking at a spa in the Worcester County town of Oxford, where police said “three Asian females were rescued from indentured sexual servitude.’’ She ultimately pleaded guilty to a reduced charge of solicitation for prostitution.

Prosecutors say trafficking investigations are time consuming and difficult — in part because authorities have come to see many of the workers involved not as criminals, but victims of sexual exploitation. Middlesex District Attorney Marian T. Ryan said she’s not interested in the quick investigation in which an undercover officer visits a massage parlor to be propositioned by a prostitute.

“He might be able to charge that person. That’s not usually what we’re looking to do,” Ryan said. “We’re trying to figure out how much of a network is this and who’s actually profiting from this. It’s a longer-term investigation. Time translates into resources.”

Aiming high, though, means clearing a high threshold in Massachusetts. To get a search warrant, authorities need to gather enough evidence to show probable cause. A wiretap? That’s a tool usually reserved for organized crime cases, after other investigative means are exhausted. As a result, state and local law enforcement officials often team up with federal authorities to target large, more elaborate trafficking networks.

Massachusetts was one of the last states to pass a law specifically barring sex trafficking. The law that took effect in 2012 imposes penalties of five to 20 years in prison for someone who recruits or entices someone into commercial sexual activity. Those convicted of trafficking a minor could spend life in prison, though no one has yet to receive such a sentence in Massachusetts, Montigny said.

But unlike federal law, Massachusetts does not require evidence that a trafficker used “force, fraud or coercion” to bring someone into the commercial sex trade.

Meanwhile, some types of massage-related businesses are not regulated at all.

A Massachusetts law required massage therapists to be licensed by the state as of 2008, but specifically exempted practitioners of “body work” — including reflexology, acupressure, reiki, and Asian body work. That left an opening for traffickers to exploit, Montigny said.

Legislation Montigny sponsored to regulate body work business has been passed several times by the Senate, but not by the House of Representatives. House Speaker Robert DeLeo would not commit to a vote this session either but said through a spokeswoman: “The House takes the issue of sex trafficking and sexual exploitation very seriously and is committed to a thorough review of all legislation that promotes the safety and well-being of our most vulnerable children and adults.”

In the absence of state oversight, some municipalities are using local health ordinances to keep a check on body-work establishments. After Arlington did so in 2013, six shops shut down, officials said. That doesn’t necessarily mean they’re out of business, though, officials cautioned.

“What we’ve found is that it’s a little bit like whack-a-mole. If we close them down here, they’ll pop up in another community,” said Christine Bongiorno, Arlington’s director of health and human services.

That was the theme that the women who tried to report Platinum Body Works heard from police three years ago — that any investigation had to be thorough, or “they would just pick up and leave if they were tipped off to move the girls to another location,” Mauche said.

Norwell Police Chief Ted Ross could not say whether the town took action at the time; the building was not permitted for residential use. But Ross suggested that mattresses would not provide enough evidence to obtain a search warrant.

“It’s a piece of a puzzle,” he said. “You have to have cooperating parties to report what’s going on.”

It was unclear what steps, if any, Norwell police or town officials took in the intervening years.

The search warrant police sought in February refers to surveillance that occurred “on numerous occasions,” but gives specifics only on dates in January 2019. A cooperating witness told police about being propositioned in the spa in November, and an undercover officer conducted a sting operation in February, according to the warrant.

They also found two Asian women who spoke very little English and a second-floor arranged as an apartment, with massage tables set up as beds. A third woman, involved in the undercover sting, was charged with sexual conduct for a fee.

The operators of Platinum Body Works, Xiangmei Eckhardt, 63, and her husband, Robert Eckhardt, 68, of Malden, were arraigned in Hingham District Court on charges of trafficking of a person for sexual servitude and deriving support from prostitution. Robert Eckhardt was also charged with misleading an officer.

Mauche and Ladka said they were both gratified and frustrated to hear action had been taken.

“It’s unfortunate that it takes that much time,” said Ladka. “But it’s also understandable that the worst thing that could happen is they up and move to Hanover, and then everything starts all over again.”