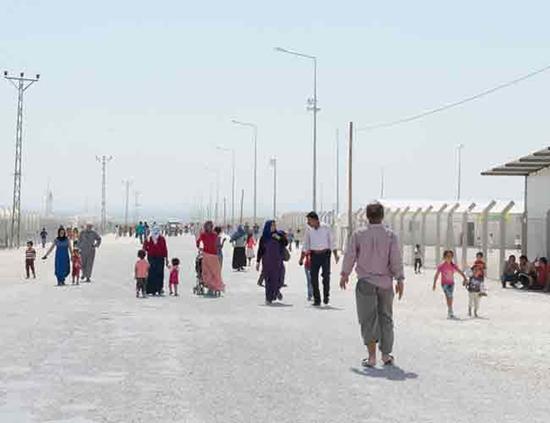 Syrian refugees have found peace and security in Turkey, a UNICEF official in Turkey told state-run Anadolu Agency during his visit to this southeastern province.

“I have seen refugees settling over four years and finding the peace and the security they were looking for while crossing the border [to Turkey],” said Philippe Duamelle.

He said he witnessed the arrival of around 4 million refugees in Turkey in the past few years, and stressed “great expression of solidarity and hospitality” extended by the Turkish people and government.

“We have seen an entire generation of children in need of assistance, and still, today, four years later, eight years into the conflict in Syria, a large number of children still need our assistance, still need the international community to remain mobilized to give a future to those children,” he said.

Noting UNICEF has been in Turkey since 1951, Duamelle said it and Turkey have a very solid, long established and close partnership, as well as a joint vision on preparing refugee children for a “better future”.

He said almost 650,000 Syrian children are “finding their way to school” in Turkey, adding more than 85 percent are in public schools.

Duamelle praised the access of refugees — children in particular — to the education, medical care and cycle social services in Turkey.

“These are amazing achievements. And the big credit goes to the Turkish government and the Turkish people for that.”

Voicing there are still a lot of children in need of assistance, Duamelle said more than 400,000 Syrian children are not at school to date, adding one of the first actions to be taken would be to find the ways to educate them.

“They need to keep the hope in the future, and education is one of the best ways to do that,” he said.

He said that educated children will rebuild Syria, as well as bring the stability and peace into the region.

“It is very important that we continue investing in children,” he said, adding that the international community needs to remain mobilized on this issue.

He said that the necessary resources should be mobilized to support the efforts made by the Turkish government to “care for such a large number of refugees”.

Recalling that children exposed to war have seen “horrendous situations” in Syria, Duamelle underlined the need of the cycle of social support.

“We need to help them how to live in a positive way and project themselves in the future in the positive way.”

Child protection, education, social protection, specific programs for young people are among the main priorities for UNICEF, he added.