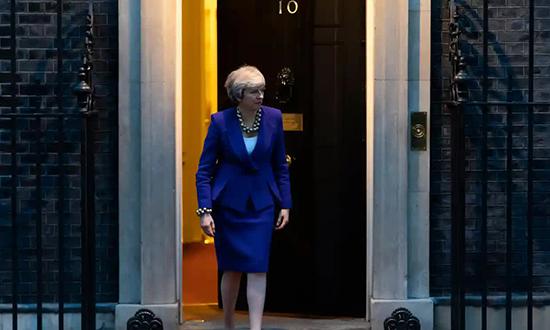 May will need votes in the week ahead from about 100 Tory and DUP Eurosceptics. Photograph: Will Oliver/EPA

Theresa May was battling on Sunday night to save her Brexit deal and prolong her premiership, amid signs Eurosceptics could move against her if there is a delay to leaving the EU.

The prime minister’s position looked precarious as she was unable to announce any progress in talks with the EU less than 48 hours before her House of Commons vote on the deal.

One Downing Street insider said the week ahead looked “choppy” as parliament is likely to vote to extend article 50 and rule out a no-deal Brexit if MPs do not approve May’s withdrawal agreement with the EU.

Two former cabinet ministers – Nicky Morgan and Dominic Raab – suggested that her premiership would be in trouble in that scenario, with speculation that Eurosceptics will try to force her out.

To avoid that threat, May will need votes in the week ahead from about 100 Tory and Democratic Unionist party Eurosceptics, who want an assurance that the UK will not indefinitely be bound by the Irish backstop and a permanent customs union with the EU.

In a last-ditch effort to win over the rebels, ministers were discussing whether the prime minister could even offer to name a departure date if it would help the deal to pass, while Philip Hammond, the chancellor, was preparing to offer billions to “end austerity” in the spring statement.

Jeremy Hunt, the foreign secretary, also warned Eurosceptics that failing to back May’s deal meant there was “a risk and a possibility that we end up losing Brexit in the next couple of weeks”.

But hardline pro-Brexit supporters were holding their nerve and insisting they would still only consider backing a deal if Geoffrey Cox, the attorney general, has changed his mind about the permanent nature of the backstop.

Steve Baker, a leading figure in the European Research Group, said: “I am clear a change of prime minister would not create an escape from the backstop unless the new prime minister were willing and able to breach international law. And that is absolutely not who we are as a fair-dealing UK.”

To those warning of a threat to Brexit, he said: “The people who would stop Brexit should know just this: what you do, you’ll have to do in public now. Stopping Brexit will be on you, not Brexiteers. Don’t kid yourselves otherwise.”

David Davis, the former Brexit secretary, also said an offer by May to resign “would not be enough” and warned that a delay to leaving the EU could cause a backlash amounting to a “Trump moment” among the public.

Many Eurosceptics will oppose a delay not just over fears it could lead to a second referendum but also the likelihood that the EU would increase the UK’s exit bill by billions of pounds.

May was also facing difficulty securing enough Labour votes to get the deal through, despite attempting to woo them with a package of guarantees on workers’ rights and cash for towns across the UK.

If May fears she is heading for a heavy defeat she may pull the vote on her deal and instead hold an indicative vote to show the EU what parliament would accept before attempting another negotiation, but there is no certainty that Brussels would be open to more talks without a change in direction towards a softer Brexit.

In an article for the Guardian, Sam Gyimah, a Conservative who resigned as a minister to back a people’s vote, warned his colleagues across the parties against voting for the deal under government pressure, suggesting bad policy decisions such as the Iraq war were made under similar circumstances.

“The framing of the choice is similar to the one MPs were presented with in the run-up to the Iraq war: military action against Saddam Hussein, or the risk of an attack on this country,” he said.

“The prime minister’s version is a similarly artificial choice: her deal, or a chaotic and disorderly exit from the EU that we know will have severe consequences for our communities. MPs are effectively being asked to choose between the frying pan and the fire, in the hope they will choose the former and that will somehow be declared as a victory.”

The prime minister was poised to fly to Brussels in the early hours of Monday if there were signs of a breakthrough but she was still undecided late on Sunday night about whether to make a last-minute dash. She was also wavering over whether to make a statement on the issue in the Commons on Monday.

If May fails to pass her deal, Labour said it was open to working with other parties to secure a better Brexit deal involving a customs union. But the prospect of parliament seizing control of the negotiations has heightened the chance of Tory Eurosceptics attempting to replace May.

Dominic Raab, the former Brexit secretary who is tipped to run for leader and already has a grassroots supporters group called Ready for Raab, told Sky News: “She has said she is going to step down. I would like to see her able to do that in a way of her own choosing. But the government has found itself in a precarious situation and, particularly if the government extends article 50 or tries to reverse the Brexit promises that we have made, I think that situation will get even trickier.”

Morgan, the former education secretary, also told the BBC’s The World This Weekend that it would be the “beginning of the end” for May’s policy if the Commons again votes down her deal and then votes against a no-deal Brexit and for an extension of article 50.

“I think that her position is going to become slowly less and less tenable as parliament changes the government’s Brexit policy,” she said. “If the votes go this week in a way which means that the prime minister’s policy as she has set out and stuck to rigidly over the course of the last two-and-a-bit years is taken away, dismantled slowly by parliament this week, I think it would be very difficult for the prime minister to stay in office for very much longer.”

She suggested the cabinet would have to “take a role in saying potentially to the prime minister, ‘Actually, things have changed significantly. We think you should think about your position, prime minister.’”