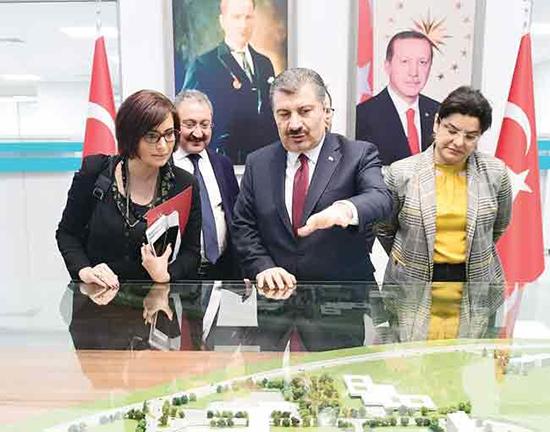 Turkey is aiming to increase its revenues from health tourism by five times until 2030 thanks to city hospitals, the Turkish health minister has said, adding that around $1.5 billion was generated from 420,000 health tourists in the past year.

“I believe the city hospitals will become the focal points of health tourism. We are setting up special units in the city hospitals to specifically serve foreign patients,” Health Minister Fahrettin Koca told media outlets’ Ankara bureau chiefs at the Ankara City Hospital on March 7, a week before its formal opening.

Turkey currently has nine city hospitals, but will have 20 in total by the year of 2020, according to the Health Ministry, while the tender process for an additional 11 hospitals is still going on.

Koca described city hospitals as the “hospitals of the future” and as constituting the second phase of the transformation of health services and informed that Romania and Malaysia were in talks with Turkey for importing this model.

The number of foreign patients that received health services in Turkey in 2018 was around 420,000, bringing in $1.5 billion revenue, Koca said, expressing the government’s objective of increasing this figure by five times until 2030.

“We observe an increase in the number of foreign patients in the fields on which we are far ahead like the cardiovascular diseases and the transplantation. In addition, we started to see a big interest from foreign patients for aesthetics and plastic surgeries and hair transplants as these services are very, very expensive abroad. In Turkey, however, these services are both at reasonable prices and conducted in high quality,” Koca said.

These city hospitals will turn into centers of excellence which can compete with world hospitals and therefore will attract more patients that seek to receive qualified medical services, the minister stated.

Upon a question, Koca informed that foreign patients are coming more from nearby countries like Azerbaijan and Iran and those in the Balkans but as well as from Europe especially for dental treatment.

“The difference in prices between Turkey and Europe with regard to periodontal diseases is is almost five to 10 times. Given the quality of the services provided in Turkey, I can tell you that we are hoping to generate more revenues from foreign patients over dental services,” he stated.

Ankara city hospital to be opened on March 14

The Ankara City Hospital that will host eight different hospitals with 3,633 beds within its massive compound will be opened by President Recep Tayyip Erdoğan on March 14. It will include 131 operating rooms at universal standards and 904 outpatient clinics which can provide health services to around 30,000 patients in a day when the hospital will operate in full capacity.

Turkey currently has city hospitals in the provinces of Mersin, Yozgat, Isparta, Adana, Kayseri, Elazığ, Eskişehir, Manisa and Ankara, with a total capacity of 12,000 beds.