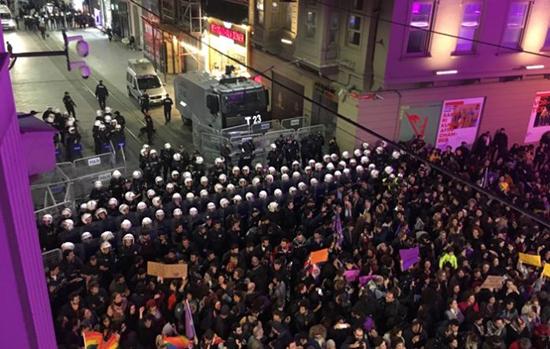 Riot police in İstanbul fired tear gas and plastic bullets to disperse thousands of demonstrators who tried to march along the city’s main pedestrian avenue to mark International Women’s Day on Friday evening.

Thousands of people, most of them women, gathered near İstiklal Street in İstanbul’s busy Taksim neighborhood for a march that police said was unauthorized.

The march, named “March 8 Feminist Night March,” has been organized annually on İstiklal Street since 2003.

The police had set up barricades at the entrance to the street and fired several rounds of tear gas to push back the marchers. Scuffles broke out as they pursued the women into the side streets off the avenue.

It was not clear if anyone was hurt or if people were detained.

Authorities have restricted protests in the country in recent years, citing security concerns.

Earlier, hundreds of people in İstanbul protested the imprisonment of women and children in Syrian penitentiaries.

Separately, four female members of Turkey’s gendarmerie rappelled hundreds of feet down Istanbul’s 15 July Martyrs’ Bridge and into the waters of the Bosporus.

Turkish police regularly block the staging of protests in central Istanbul and elsewhere. Ankara tightened restrictions after the imposition of a state of emergency following an attempted coup in 2016. The state of emergency was lifted last July.