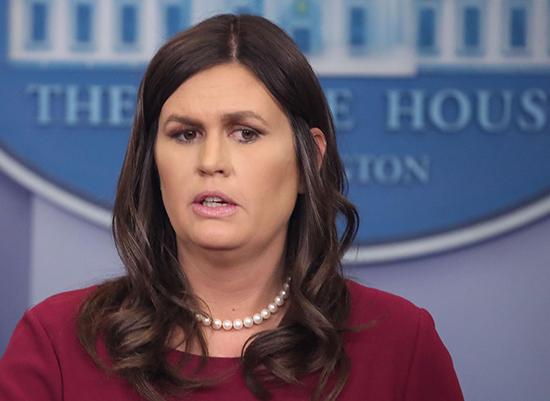 WASHINGTON (Reuters) – The White House said on Monday it was “absurd” to suggest that President Donald Trump was an unreliable negotiator as China reportedly balks at a summit with President Xi Jinping over concerns Trump would walk away from a trade deal.

Washington and Beijing are still in negotiations and no date has been set for a summit, White House spokeswoman Sarah Sanders told reporters.

The two leaders had been expected to meet at Trump’s Mar-a-Lago property in Florida at the end of March to finalize a pact that would end a months-long trade war.

But U.S. officials have said more work remains to be done.

The White House is demanding that China make structural reforms, including how it treats U.S. intellectual property and forces U.S. companies to share their technology when doing business in China.

Those sticking points have been difficult to overcome, despite progress on other issues, including currency.

Sanders scoffed at reports that China was wary of a summit after Trump did not make a peace deal with North Korean leader Kim Jong Un during a summit in Vietnam.

Treasury Secretary Steve Mnuchin said during a meeting between Trump, his trade team and visiting Chinese negotiators last month that a summit with Xi could happen in March.

But no in-person trade talks between the two sides have been announced since the last round in Washington last month concluded with a decision by Trump to delay an increase in U.S. tariffs on Chinese goods, thanks to productive negotiations so far.

Sanders said on Monday she was unaware of any calls planned between Trump and Xi.

“The president’s going to make sure whatever deal we get is in our best interest, that it’s fair and reciprocal trade, that it protects our intellectual property, and that it actually has safeguards to make sure that the Chinese follow through with whatever commitments that they make,” she said.

Separately, China’s official news agency said that Vice Premier Liu He had spoken by telephone with Mnuchin and U.S. Trade Representative Robert Lighthizer about key issues in the trade talks.

The two sides set the next steps in “working arrangements”, Xinhua added, without giving details.

Liu, who is Xi’s top economic adviser, has been leading the talks for the Chinese side.