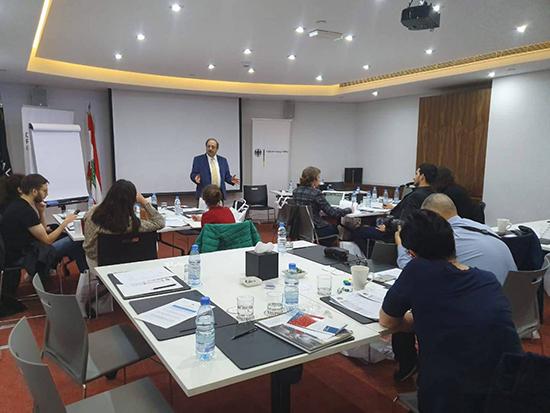 The law was officially passed on January 19, 2017, yet only a few people recognize the amount of rights it provides.

by By Maria Matar and Zeina Nasser -Source: Annahar

BEIRUT: Democracy Reporting International in collaboration with Gherbal initiative organized a workshop, funded by the German Foreign Office Saturday to raise awareness about the access to information law and its benefits for journalists and media platforms in particular, in the presence of the former member of the parliament Ghassan Moukheiber.

The law was officially passed on February 10, 2017, yet only a few people recognize the number of rights it provides.

In brief, it allows any person, whether Lebanese or a foreigner, a natural person or a legal entity, to request access to information from all public entities and a small number of private entities as well.

In his opening speech, Assaad Thebian, founder and CEO of Gherbal initiative noted the purpose behind the workshop.

“We discovered that few journalists are using this law for many reasons. Some aren’t aware of it, some haven’t been trained by their institutions, and some need technical and practical help,” he said.

The aim of the event was to inform journalists about that law and clear the misconceptions around it.

Assad also mentioned: “We want to let them know that we are ready to help journalists in the future to gather data, to follow up on their requests and to lobby with them for better access to information.”

Founded in 2017, Gherbal [means sift in Arabic] Initiative (GI) is a non-profit civil company whose mission is to push for transparency and accountability based on the idea that the democratization of data can act as an antidote to corruption. GI collects and converts complex datasets into accessible and engaging visualizations that frame public discourse and propel political action.

Gherbal is a pioneer in this field and is now providing capacity building for media personnel.

Thebian continued to explain the articles of the law and their details; attendees engaged in the discussion, asking questions and taking notes. Most of them were shocked and saw in the law a solution for many of the problems they faced.

“I was really interested to learn about this law because I have faced several obstacles when requesting information from public entities. Today, after knowing that it is a legal right of mine, I will be more confident in my pursuit of public data,” said Mohammad Darwish, one of the present journalists.

During the day, Andre Sleiman, country representative of DRI in Lebanon demonstrated the organization’s statistics about the work of the municipalities in Lebanon, within the framework of its project “Setting an Agenda for Decentralization in Lebanon”.

Democracy Reporting international is a non-partisan, independent, non-profit organization registered in Berlin. It promotes political participation of citizens, accountability of state bodies and the development of democratic institutions worldwide and it supports local ways of promoting the universal right of citizens to participate in the political life of their country.

The workshop ended with a word from a former member of the parliament Ghassan Moukheiber who was the MP who presented the law to the parliament as a member of the Lebanese Parliamentarians Against Corruption (LebPAC) coalition and on behalf of the National Network for the Right of Access to Information.

Moukhaiber, however, said that “the law is not a tool that can protect Lebanon’s corruption alone, yet it’s one of the tools”. He continued to say that the law of access to information should be used properly, and should be combined with other tools.

“Even if a political will was present regarding fighting corruption, accountability remains so weak in Lebanon,” he said.

Information, however, should not only be found but also analyzed. After that, monitoring will be much more effective.