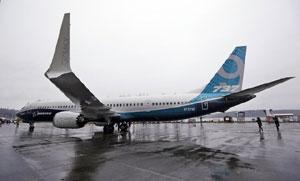 (Reuters) – Boeing Co shares tumbled more than 5 percent on Monday after China, Indonesia and Ethiopia ordered airlines to ground the aircraft maker’s best-selling line of jets after the second deadly crash of one of the planes in just five months.

While the slide lopped off $12.7 billion in the market value of one of the 10-year bull market’s powerhouse stocks, the one-day loss was far more limited by the closing bell than earlier in the session as some investors bet long-term risks were limited.

Dropping in the early moments of trading by the most since Wall Street reopened after the Sept. 11 attacks in 2001, the stock recouped nearly two-thirds of its losses on the heaviest trading volume in nearly six years.

“Despite the immense tragedy we think the company will fix what we believe is largely a software and training issue,” said Nancy Tengler, chief investment strategist at Tengler Wealth Management, which counts Boeing among its largest holdings.

The volatility followed Sunday’s crash of a Nairobi-bound Boeing 737 MAX 8 operated by Ethiopian Airlines just minutes after takeoff from the country’s capital Addis Ababa, killing all 157 on board. The same model, flown by Lion Air, crashed off the coast of Indonesia in October, killing all 189 on board.

The single-aisle 737, the world’s most-sold commercial aircraft, is central to Boeing’s future. The MAX line is the fastest-selling jetliner in the company’s history with more than 5,000 orders booked and a backlog valued at nearly $500 billion at list prices.

The 5.3 percent drop in share price on Monday wiped nearly $13 billion off Boeing’s market value – an abrupt reversal for a stock that had been the runaway top performer so far this year on the Dow Jones Industrial Average.

With a stock price of about $400 a share, it was by far the largest drag on the price-weighted, blue-chip index on Monday, shaving more than 150 points off the Dow’s advance.

It was unclear whether the accident would pose a long-term risk to a stock that has delivered the richest total return among the 30 stocks in the Dow over the 10 years of the current bull market.

Since U.S. stocks began rebounding from the 2007-09 financial crisis in March 2009, Boeing shares have delivered a total return – including reinvested dividends – of nearly 1,600 percent, or four times the performance of the full index.

Boeing’s shares shed 12 percent in the weeks following the Lion Air crash last year, but have since more than recouped those declines.

Spreads on Boeing’s bonds, a measure of the added compensation investors demand for owning its debt, were also broadly wider, data from Refinitiv showed. Its credit default swaps, a form of insurance against a Boeing default, rose sharply in price, according to IHS Markit.

The company has about $13.8 billion of bonds issued.

Boeing said on Monday the investigation into the Ethiopian Airlines crash is in its early stages and there was no need to issue new guidance to operators of its 737 MAX 8 aircraft based on the information it has so far.

In an email seen by Reuters, Boeing’s chief executive told employees on Monday he was confident in the safety of the U.S. manufacturer’s 737 MAX aircraft in the wake of two deadly crashes since October.

Wall Street has been overwhelmingly bullish on Boeing – 19 of the 24 brokerages covering the stock rate it “buy” or higher, while five have a “hold” rating. No brokerage has had a sell rating on the stock since July 2017.

Even with Monday’s drop, it remained the Dow’s best performer so far this year with a gain of 24 percent compared with 10 percent for the full index.

Morgan Stanley analyst Rajeev Lalwani said there would be concerns about safety, production, groundings and costs, but that those should all be manageable longer term.

He said the bank’s positive “overweight” recommendation on Boeing shares was not changing, and that any corrective action the jetmaker has to take on its best-selling passenger plane will likely prove a longer-term buying opportunity.

Investigators have found the black box from the fatal crash with both the cockpit voice recorder and digital flight data, Ethiopian state TV reported on Monday, which should shed light on the cause of the crash.

Earlier in the day, China’s aviation regulator grounded nearly 100 Boeing 737 MAX 8 aircraft operated by its airlines after the crash.

Southwest and American said overnight they remained fully confident in the aircraft and were closely monitoring the investigation.