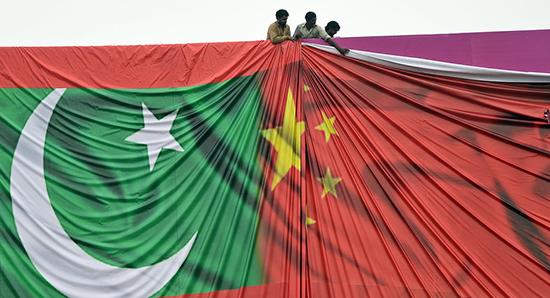 China has advised its long-time ally Pakistan and India to work together on defusing the simmering tensions and build a lasting peace to guarantee stability in the region.

Chinese State Councilor and Foreign Minister Wang Yi said that Beijing played a constructive role in de-escalating the recent tensions between Pakistan and India, and referred to Pakistan as “China’s iron brother”.

“China played a vital role in defusing the conflict between the two countries. Islamabad and New Delhi should meet each other to deescalate the crisis”, Wang said at a press conference on the margins of the second session of the 13th National People’s Congress.

He then expressed hope that Islamabad and New Delhi would start a constructive dialogue to solve the crisis:

“China hopes Pakistan and India will replace confrontation with dialogue, settle a disagreement by goodwill and create a better future through cooperation. China also hopes Pakistan and India will transform the crisis into opportunity and meet each other halfway. We advise both parties to quickly turn this page and seek a fundamental long-term improvement in their relations”.

While reiterating support for Pakistan, Wang stressed that “Chinese dragons and Indian elephants won’t clash. Instead, they will dance with each other”.

Wang’s comments come several days after China’s Vice Foreign Minister Kong Xuanyou paid a visit to Islamabad. During the visit on 6 March, he reaffirmed Beijing’s support for Pakistan regarding peace and stability in the region, and acknowledged Islamabad’s steps against terrorism.

“China has paid close attention to the present situation between Pakistan and India, and appreciates Pakistan’s remaining calm and exercising restraint from the beginning, and persisting in pushing to lower the temperature with India via dialogue”, the foreign ministry cited Kong as saying.

Pakistan is one of China’s closest allies: Beijing has invested billions of dollars in the country as part of the China-Pakistan Economic Corridor, an infrastructure project that aims to link its western province of Xinjiang with the Arabian Sea port of Gwadar in Balochistan Province.

The massive project is part of Beijing’s Belt and Road initiative, comprising a vast network of roads and sea routes involving 54 countries.

Historically tense relations between India and Pakistan hit a new low last month after the Indian Air Force conducted an air raid against a suspected Jaish-e Mohammad terror camp in Pakistan-administered Kashmir. The move was prompted by a deadly suicide bomb attack on a convoy with Indian security forces claimed by the group.

On 27 February, just a day after the IAF strikes, Islamabad announced that it had shot down two Indian aircraft over the Line of Control and captured an Indian pilot who safely ejected himself and landed on the Pakistani side.

New Delhi confirmed the loss of only one of its MiG-21s and claimed that it had brought down a Pakistani F-16 fighter jet, having displayed fragments of an AMRAAM medium-range missile that was recovered in Indian-administered Kashmir. The missile is alleged to have been launched by a US-built jet, although Islamabad has vehemently denied losing any F-16s, or even scrambling them for a dogfight.