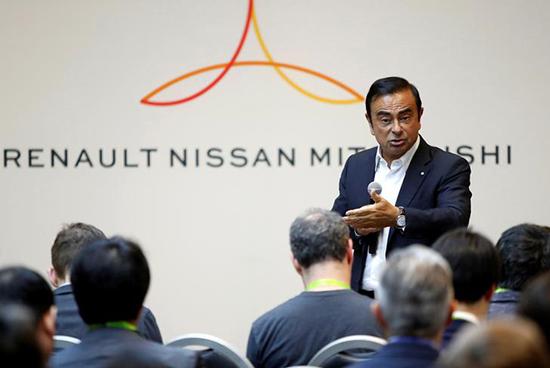 The three leaders of the world’s top car-making alliance gathered in Japan on Tuesday, looking to secure a partnership that was built by former Nissan boss Carlos Ghosn and then possibly imperiled by his ouster.

A Tokyo court on Monday rejected Ghosn’s request to attend Nissan’s board meeting, denying him a seat at the table even as the carmaker looks set to bolster the alliance with Renault and Mitsubishi Motors that Ghosn drove for over two decades.

Released on one billion yen bail last week after spending more than 100 days in a Tokyo detention center, Ghosn faces charges of under-reporting his salary at Nissan by about $82 million over nearly a decade – charges he has called “meritless”.

In the wake of the scandal, Renault has started its own review of payments to Ghosn.

His dramatic arrest in November and the long detention that followed exposed tensions between Nissan Motor Co and its top shareholder, France’s Renault SA, causing concern about the future of the alliance – the world’s largest maker of automobiles, excluding heavy trucks.

Some at Nissan had been unhappy with Ghosn’s push for a deeper tie-up, which was seen as possibly including a full merger. Smaller Renault owns 43 percent of Nissan after rescuing the Japanese company from near-bankruptcy in 1999. Nissan holds a 15 percent, non-voting stake in Renault, whose top shareholder is the French government.

While Ghosn himself has cast the charges against him as a boardroom coup, there are clear signs emerging that the alliance looks set to continue.

Renault on Monday confirmed it was in talks with Nissan and Mitsubishi Motors Corp about setting up a new alliance body to improve their collaboration.

“The proposed arrangement will have no impact on the existence of the (alliance agreement) and the cross-shareholding structure, which will both remain in place,” Renault said.

Nissan, Renault and Mitsubishi plan to set up a joint board meeting structure under which Renault’s new chairman, Jean-Dominique Senard, is likely to take the chair, people with direct knowledge of the matter have told Reuters.

That would replace Dutch-based companies currently linking Nissan and Renault and, separately, Nissan and Mitsubishi Motors, the people said.

The heads of the partners will hold a news briefing at Nissan’s Yokohama headquarters later Tuesday, Nissan said.