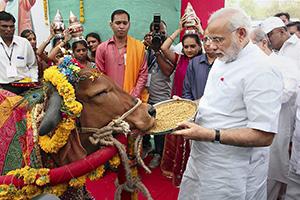 Reuters-NEW DELHI (Reuters) — India will hold a general election in seven stages starting on April 11, the election commission said Sunday, in what will be the world’s biggest democratic exercise with Indian Prime Minister Narendra Modi likely to benefit from tensions with Pakistan.

About 900 million citizens will be eligible to vote, 15 million of them aged between 18 and 19, in a mammoth exercise lasting more than a month, Chief Election Commissioner Sunil Arora said at a press briefing in New Delhi on Sunday.

Until a few weeks ago, a shortage of jobs and weak farm prices were seen denting Modi’s popularity. But pollsters say his ruling Hindu-nationalist Bharatiya Janata Party (BJP) now has a clear advantage after India’s armed forces clashed with those of arch-rival Pakistan last month, triggering a wave of patriotic fervor across the country of 1.3 billion.

Of the 543 parliamentary seats up for grabs, 241 could go to Modi’s ruling alliance, compared with 141 to the Congress party-led opposition alliance, according to a nationwide survey of 50,000 people by the CVoter polling agency conducted over the past four weeks.

“The Hindi heartland — barring Uttar Pradesh — has charged up due to the Pakistan issue,” said Yashwant Deshmukh, founder of CVoter, referring to the northern state of Uttar Pradesh that sends the largest number of lawmakers to India’s lower house of Parliament and is a key battleground for the election.

Earlier surveys released in January, before the most recent tension with Pakistan, showed the BJP and its allies emerging as the largest group in the election but falling short of a majority.

In 2014’s general election, the BJP won 282 out of 543 contested seats — the strongest showing for any political party in three decades.

However, the main opposition Congress party, which late last year ousted the BJP from power in three largely rural states, is trying to band together with regional and caste-based parties to oust Modi.

Congress, controlled by the Nehru-Gandhi dynasty that ruled India for most of its post-independence history, is banking on voter resentment to propel the opposition alliance to victory.

The recent clashes between India and Pakistan were triggered after a Feb. 14 suicide bombing that killed 40 Indian paramilitary police in the northern region of Kashmir claimed by both countries. A Pakistan-based militant group claimed responsibility for the attack, and India accused Pakistan of complicity — a charge Pakistan denies.

Aerial confrontations between the nuclear-armed nations ensued and, although questions have been raised about how effective the Indian military action actually was, Modi’s approval rating soared.

“For the first time I will vote for Narendra Modi because I like what he has done against Pakistan,” said Anjali Tivari as she was picking up her son from school in Mumbai. “I’m impressed. He gave the right answer to Pakistan.”

HSBC Securities and Capital Markets said in a note that national security and nationalism could trump economic issues in determining voters preferences.

Arora, the chief election commissioner, said three special observers would be deployed in the northern Jammu and Kashmir State, where India is battling multiple insurgencies and where elections are usually marred by violence. Votes will be counted on May 23, he said.

He also said Facebook, Twitter, Google and WhatsApp have committed to cracking down on fake news by deploying fact checkers and grievance officers.

There has been mounting concern in India that political party workers could spread false news on the social media platforms to sway voters. WhatsApp has in particular become a key campaign tool used widely by both leading parties.

The commission has also set up a separate team to monitor expenditure of political parties after a record spend in the 2014 election. Many parties understate their expenses and monitoring has been difficult in the past.Speech