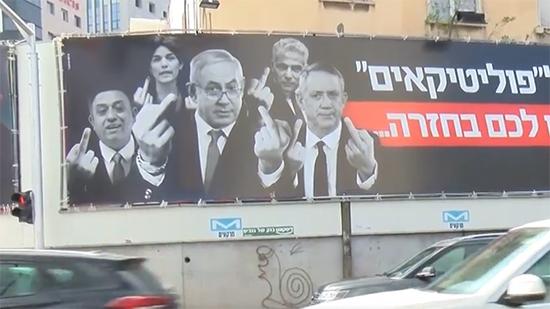 Russia  Today
As Israelis prepare to go to the polls next month, hundreds of profane posters are popping up around the country, depicting the state’s establishment politicians giving the middle finger to the electorate.

“This time, don’t vote for politicians who will give you the finger in return,” the posters read, playing on the fact that the words for “to vote” and “to point” are the same in Hebrew.

The posters are the work of the new Yashar party, which is running on a platform that includes giving citizens the ability to influence lawmakers’ daily decision-making through a smartphone app.

The party erected 400 signs in prominent locations around Israel. “The ‘middle finger’ campaign is making waves throughout the country,” a Yashar spokeswoman told The Jerusalem Post. “The public is responding to it, because we all know this is the truth. The politicians don’t care about us…. Most of us don’t have who to vote for.”

However the outrageous posters have received some pushback from voters. One Tel Aviv resident told Ruptly that he finds the stunt extremely distasteful. “It’s negative. It’s not respectful at all. It disgusts me,” Haim said.

Polling suggests Yashar will fail to make any waves when polling opens on April 9.