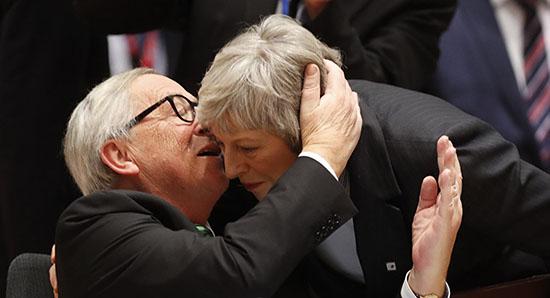 Daniel Boffey in Strasbourg and Rowena Mason in London –  The Guardian

Theresa May has called for MPs to “come together” to back her deal after claiming to have secured the legally binding changes parliament wanted to ensure the EU cannot trap the UK in the Irish backstop and a permanent customs union.

But within minutes of the start of a late-night joint press conference in Strasbourg, those words rang hollow, as Jean-Claude Juncker, the European commission president, conceded the EU had not agreed to the prime minister’s central demand.

Juncker told reporters that a freshly negotiated legal add-on to the Brexit deal, emphasising the temporary nature of the Irish backstop, “complements the withdrawal agreement without reopening it”.

He added that the new text was in “spirit and letter by letter” in accord with the EU’s commitment to an insurance policy from which he has repeatedly insisted neither side could unilaterally withdraw.

Text for legal add-ons to the withdrawal agreement

The commission president nevertheless rallied to May’s defence by warning MPs that Brussels would not be offering any further “reassurances or clarifications”.

In an echo of the prime minister’s own warning to her Brexiter MPs, Juncker added: “Let us speak crystal clear about the choice: it is this deal, or Brexit might not happen at all.”

Following the historic defeat of her deal by 230 votes in January, May had promised MPs that she would secure a unilateral exit mechanism from the backstop, a time-limit or its replacement with an alternative arrangement, such as a technological fix.

Asked whether she had secured those objectives in her 11th-hour dash to Strasbourg for talks with Juncker, May did not directly answer. “What we have secured is legally binding changes which is exactly what parliament asked us to secure,” she said. “And what we have secured is very clearly that the backstop cannot be indefinite, cannot become permanent. It is temporary if it is the case that we were ever to get into the backstop.”

A joint interpretative instrument added to the withdrawal agreement reiterates language already in the draft treaty that the EU could not seek to trap Britain in the backstop by failing to negotiate a new trade deal in good faith.

An additional joint statement in the political declaration on the future trade deal further commits both sides to work on developing new technologies at the border to be ready for December 2020.

The final part – a unilateral statement by the UK – argues that there would be nothing to stop Britain seeking to “disapply” the backstop if the EU did not act in good faith and negotiations on an alternative had broken down.

However, there was immediate scepticism from the pro-Brexit European Research Group (ERG) and from Labour over whether the changes would be enough to secure the backing of the House of Commons.

Jeremy Corbyn said May’s “negotiations have failed” and he called on MPs to reject the deal.

“This evening’s agreement with the European Commission does not contain anything approaching the changes Theresa May promised Parliament, and whipped her MPs to vote for,” Corbyn said.

“Since her Brexit deal was so overwhelmingly rejected, the prime minister has recklessly run down the clock, failed to effectively negotiate with the EU and refused to find common ground for a deal Parliament could support.”

The shadow Brexit secretary, Keir Starmer, cast doubt on whether the changes would actually be legally binding, saying: “It sounds again that nothing has changed.”

He said: “If all that’s happening is to turn this letter into an interpretative tool for legal purposes, I remind the house what the prime minister said on 14 January about this letter.

“She said she had been advised this letter would have legal force in international law. To stand here today and say this is a significant change when she’s repeating what she said on 14 January is not going to take anyone here far.”

Speaking to the Commons shortly before the prime minster’s press conference, May’s de facto deputy, David Lidington, would only say that Geoffrey Cox, the attorney general, would consider his legal advice in light of the changes and publish an update on Tuesday morning.

Steve Baker, an ERG member and former Brexit minister, told the BBC: “Even by the government’s own standards I think this falls very far short of what the government whipped us to vote for.”

To secure backing for her deal, May will need to win over dozens of hardline Eurosceptics in the Conservatives and the Democratic Unionist party, whose refusal to back the original agreement led to a record Commons defeat by more than 230 votes in January.

The leader of the Democratic Unionist party, Arlene Foster, whose MPs the prime minister relies on to get legislation through parliament, said: “These publications need careful analysis. We will be taking appropriate advice, scrutinising the text line by line and forming our own judgement.”

Steve Baker, a leading figure in the ERG, said the government had put “a very good gloss on something that falls short”. But he later added: “Now we have the outline of what has been agreed, I look forward to the full text and the opinion of the team of lawyers we have set up to advise us … it’s good to see rising enthusiasm and reference in legal text to the Malthouse compromise.”

Other senior Eurosceptics, including the former Tory leader Iain Duncan Smith, called for the meaningful vote to be delayed to give MPs more time to consider how to vote.

Many Eurosceptic Conservatives are likely to follow the lead of the Democratic Unionists, but Nigel Dodds, the DUP Westminster leader, would only say: “All of this will need to be taken together and analysed very carefully.”

The government’s motion, due to be voted on by MPs on Tuesday, refers to a unilateral declaration setting out the sovereign action the UK would take to ensure the backstop would only be applied temporarily.

To guide the Eurosceptics, the deal was due to be examined by a committee of eight lawyers in the ERG, including Sir Bill Cash and the former Brexit secretary Dominic Raab. The most crucial figure is Dodds, as the leaders of pro-Brexit Tories, including Jacob Rees-Mogg and Boris Johnson, are likely to be influenced by the DUP’s view on whether the backstop is acceptable.

If the concessions are not deemed adequate, one plan being discussed in the ERG is to table an amendment to May’s motion saying parliament’s approval would be conditional on “alternative arrangements” being found to replace the Irish backstop. They would then ask the government to support that amendment in return for them voting for May’s deal.

Others close to the ERG believe that the group will only agree to support May’s deal and weaker concessions than they would like if she promises to name a date for her departure.

However, May could come back with another attempt at a meaningful vote at some point over the course of the week, especially if she only loses by a narrow amount. This would probably have to involve some more incentives for Labour MPs, such as giving parliament more control over the shape of the future relationship.

Some in the ERG are expected to hold out against the deal no matter what May comes back with and do everything they can to nudge the UK towards a no-deal Brexit.

A leading cabinet source said there was increasing concern about the prospect of a no-deal Brexit by accident – on 29 March or at the end of an extension period – if there was no parliamentary majority for May’s agreement because time was running out to pass legislation necessary to block one.