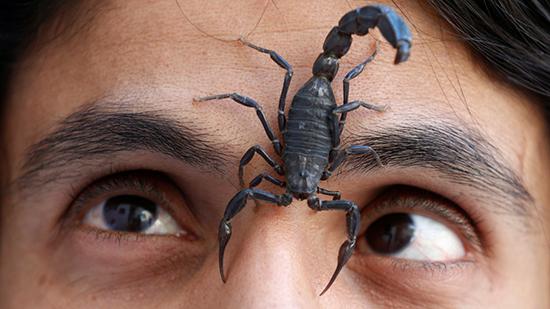 Russia  Today
As if flying wasn’t stressful enough, a Canadian student’s story of being stung by a stowaway scorpion mid-flight is adding a whole new dimension to air travel anxiety.

Those with a fear of flying are generally concerned with the idea they might have to use the flotation device under their seat rather than what might be hiding alongside it. This is poised to change, however, after Quin Maltais detailed feeling a sharp sting – only to later find out the culprit was a four-inch scorpion hiding in the fold in the back of her chair.

Maltais was on the last leg of an Air Transat flight between Toronto and Alberta when she felt a fluttering motion on her back. While she initially brushed aside the sensation imaging it to be the air-conditioning, things got a lot more serious when she felt a sharp intense pain in her lower back.

“As soon as the lights turned off again, closer to when we’re literally about to land, I felt the piercing pain on my lower back, like, oh, my God, something bit me.”

To make matters worse, the fact that the plane was currently landing prohibited her from standing to check what had happened.

After the fasten-seatbelt signs were finally switched off, she stood and looked behind her to see the black arachnid still squirming in her chair, which resulted in the kind of full-on panic one would expect upon realizing that something that looks like a spider with a knife for a tail had been crawling across their body.

While the flight attendants initially tried to ensure that it had simply been a gum wrapper, they eventually discovered the nightmarish creeping culprit still scuttling inside the seat before calling for backup.

“I had a full-fledged panic attack … paramedics had to kind of keep me strapped to a heart monitor for a while cause I was just unable to calm down,” Maltais said. EMS treated her immediately and she received no serious injury and, luckily, had not been poisoned by the creature.

The scorpion was eventually captured, but there is still no word from the airline on how it got on the plane in the first place.

Although the airline assured everyone that it was an “extremely rare situation,” some people are understandably left with a few concerns.

After all, it only seems reasonable that passengers of any species be banned from boarding an airplane with a weapon, even if irremovably attached to an appendage.